As Far As It Goes

As Far As It Goes

I predicted last August that Dreamgirls (Dreamamount, 12.15) would be a huge thing for costar Jennifer Hudson, who has the role (i.e., Effie White) with the most soul and punch and heartache. I was right. The Best Supporting Actress Oscar is probably hers for the taking. But my feelings are otherwise torn about Bill Condon and Larry Mark and David Geffen‘s period musical, which had its first big preview Wednesday night at the Academy theatre. 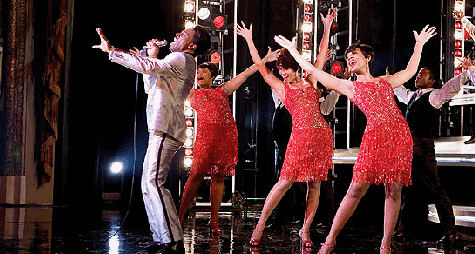 I was delighted with it in spurts and pieces — it has a knockout feeling from start to finish, and delivers an adrenalized rush that’s either going to get you or it won’t. It’s one dazzling, machine-gun-edited musical number after another that “sells” itself like there’s no tomorrow, and the sum effect is like something washing over you.
Like, say, a 100-gallon vat of Red Bull and 7-Up. Okay, with a little whiskey and heartbreak thrown in, and a lot of cigarettes and some bad substance abuse on the side.
This is the story of the Supremes — how it all began and came together, and then took off and went sour and finally shook down. It’s recognizably real and yet fast and fizzy — another of those hard-knocks, rough-and-tumble showbiz sagas, this time seasoned with heavy doses of Motown-Broadway pizazz.
< ?php include ('/home/hollyw9/public_html/wired'); ?>
But it didn’t feel to me like it really and truly sank in. After a while you feel so soaked with the stuff it’s selling that you start to go a little bit mad. It didn’t make me angry at all — this is not Chicago but somewhere around the half-hour mark I began to say to myself, “What’s with the push-push, go-go, pop-pop all the time? Why can’t we downshift and quiet down here and there, so we can possibly hear someone’s heart beating?”
That’s not the deal, I realize. This is essentially Michael Bennett‘s vision of Dream- girls re-dreamt and re-launched, and I knew what that probably would be. And I wanted to feel great about it. I really did. 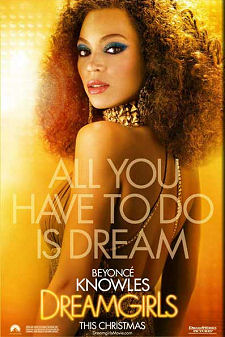 It didn’t feel to me like a real river of a movie (and I trust I don’t have to explain that one — some films have a primal gravity feeling that tells you in a dozens of different ways that you’re into something earthy and fundamental) but for some, like those cheering and whooping in the Academy theatre last night, the razzle dazzle will be enuf.
I “liked” Dreamgirls, for the most part. I didn’t feel hostile in the least. I was entran- ced and smiling and going with a feeling of being among some very good and talented people who are doing everything they can to make me feel it (which I did, as far as it went). I had a much better time with it than I did with Chicago, which I despised to the depths of my soul. But at the same time I felt something missing.
I was going to sort out my feelings and shake it out before writing anything (it won’t open for another 29 days), but then I woke up this morning to a giddy bungee- jumping David Poland rave, and some of the things he said made my brain go into spasms. And then Roger Friedman jumped in, and then Tom O’Neil. But let’s bang up against the Poland.
“Dreamgirls landed in Beverly Hills…last night, and left a giant crater in the Oscar season,” he began. My idea is that it was more of a meteorite that hit and then careened off and then hit and hit again, like a stone skimming across a pond. Dreamgirls is a wowser and not just in a spirited or “technical” sense — it’s a full-tilt, full-throttle thing all the way. It will no doubt turn a lot of people on (it definitely got me from time to to time) but I was there in the room and the feeling during the after-party was not that one of standing at the edge of a huge crater and going, “Wow…big one. I can still feel the tremors.” 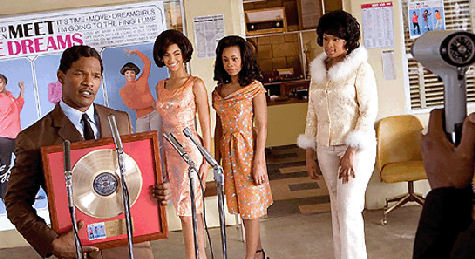 The feeling was a mixture of some delight and merriment, contentment (“I went with it,” a journalist friend said) and a kind of “let’s talk this out” therapy session. I wasn’t confused but I felt a wee bit unresolved. I knew I had enjoyed it as much as I’m capable of enjoying an obviously first-rate Motown glitter-funk gay man’s extravaganza, but I was going from person to person and saying (with variations), “It’s not that I didn’t like it — I did for the most part and it’s a great sell. I loved Jennifer Hudson to death. But it feels like a two-hour sketch.”
I realize that there’s something inherently sketchy about all musicals — you’re never going to get Long Day’s Journey Into Night with songs — but for me, Dream- girls is too pat. Everything is in shorthand. Nothing is off or raggedy or haphazard. It doesn’t feel like Detroit, or like the ’60s or ’70s even. It feels like it’s happening in director-writer Bill Condon‘s head, and that’s fine. There’s no one who respects his talent and chops more than I.
“The film was everything promised and more,” Poland said. I would say it was everything promised and somewhat less. Not a crashing disappointment, but a film that simultaneously roused and satisfied in several ways, but didn’t quite bring it home.
Dreamgirls is a highly-charged moviefication of a hot stage musical that was (I’m told) all songs and sparkle (which benefitted from Michael Bennett‘s inspired staging), and nothing really acted or spoken. Condon has, I’ve been told, added narrative tissue and emotional intimacy and made it more of a people thing and less of a big, brassy presentation. I can half-see that, and I respect the effort. 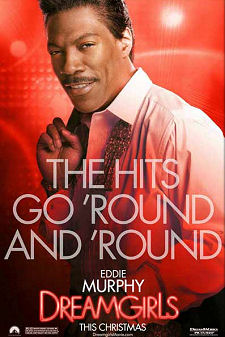 And yet Hudson aside, I didn’t feel much for anyone. They’re all “on” and, as far as it goes, “terrific.” But I wasn’t rooting for Beyonce Knowles and her thin Diana Ross character, and as much as I liked watching Eddie Murphy, Jamie Foxx, Anika Noni Rose, Danny Glover, Keith Robinson and Sharon Leal, I felt pretty neutral about the fates of their characters.
Poland actually said (this was the biggest mindblower for me), “It’s like the old question, is Chinese food in China ‘Chinese food’ or just ‘food?'” A rave review should not, I feel, bring up this metaphor. The odd thing is that I don’t feel this way about Dreamgirls. I feel that the “all” of it, in a certain sense, is quite substantial.
But it’s not an emotional bath experience as much as an emotional car wash — you’re in a mint-condition 1970 Cadillac with the windows up and everything sealed tight, but instead of moving through the water and brushes and soap and hot air at 2 miles an hour, you’re moving at 80 or 90 miles an hour and the car-wash tunnel is almost 185 miles long. I’m saying that for all the application of craft and feeling and kick-out soul, the emotional moisture never really penetrates.
But Jennifer Hudson, at times, is in the car right next you and she’s the absolute real deal. I loved her. I love her now as I’m sitting here. I loved her hurtin’ stuff. I loved her singing “what about what I feel? what about what I need?” I loved the way she sang “Love You I Do,” a new number written by Henry Krieger. I loved the way she sang “One Night Only.” But anyone who says she should be pushed for Best Actress is insane. She’s the new kid and she’s not in Helen Mirren‘s or Judi Dench‘s or Meryl Streep‘s class…please. 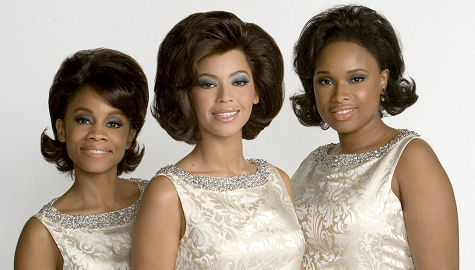 Poland has written that Beyonce “absolutely deserves” a Best Supporting Actress nomination. It won’t happen. Her best moment comes when she sings another Henry Krieger song, “Listen,” but her character (like the real-life Diana Ross) is mainly about opportunism and eyelash-fluttering and going for the gold. The only reason she turns is because Jamie Foxx’s character turns into a shit and she feels she needs to go elsewhere to grow. But if he’d been a better, more sensitive partner, Beyonce’s character would be about complacency from start to finish.
Poland thinks Dreamgirls is going to win for Best Picture. It might, but I spoke to people last night who were four-square against it and they were saying “no way.” One guy even said it may not be nominated.
If it does win, I know I won’t go into convulsions like I did when Chicago took it. I know that Dreamgirls doesn’t have the human-condition current that makes films like The Lives of Others, Babel, Volver, Little Miss Sunshine, The Queen and United 93 truly special experiences. It has a musical current, yes, and that punch-it-out spritzy-wow thing, but….
I know that Condon has done as good a job at this kind of thing as anyone could. I don’t pretend to fully understand or support it 100% — I can only try to feel it as best I can and hope for the best — but as far as this kind of musical goes, the heart and effort that went into it has my respect. Let’s leave it at that. For now.