As Good As It Got

As Good As It Got

Everyone has been calling ’04 a fairly weak year, but this same tune is played every damn December. 2004 may not have been gold bullion, but it was better than okay.
I’ll allow that ’04 didn’t measure up to 1999, the last truly stunning year (VISITORS contributor Steve Coppick made a good case for this in his 9.15 column), but I’ve just tallied my best and worst films of `04, and the numerical facts are these:

There were not just 10, but 16 2004 features that could be called extremely good. Added to these are 36 features I would describe as good’s, pretty good’s and/or not half bad’s, for a grand total of 52 films. That’s par for most years.
Add to these my list of 17 tolerables (i.e., movies that may not exactly have lifted you off the ground, but didn’t deliver a feeling of having been burned) and you’ve got 69 films — one movie released every 5.3 days throughout the whole year that was tip-top, pretty good or didn’t piss you off.
< ?php include ('/home/hollyw9/public_html/wired'); ?>
On the other side of the ledger I’ve only come up with 36 crap films — 14 stinkers, 3 surprisingly bad’s (given the calibre of the filmmakers) and 19 pretty bad’s that weren’t 100% terrible due to a few redeeming characteristics.
The general rule of human endeavor says that 80% of everything is crap or close to it, so obviously I’m not paying enough attention to the duds (I don’t even see the ones that smell especially bad), but it’s still noteworthy, I think, that the good’s numerically outweigh the not-good’s.
It was a fairly decent year, then. Not weak, not so-so…a relative goodie. There are many ’04 films not worth mentioning, or that I missed or haven’t yet seen. Forget those films — here are the ones that stood out in some pertinent way: 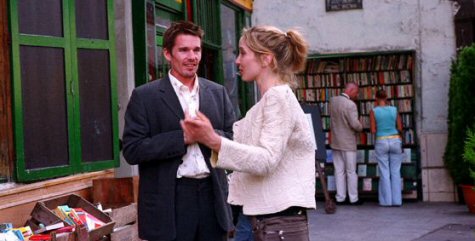 Vaguely Shitty (in order of descending quality) [note: distribs not listed due to encroaching deadline, and who cares at this point anyway?]: The Ladykillers, Ned Kelly, Fifty First Dates, Connie and Carla, Troy, Shrek 2 , The Notebook, ending of The Stepford Wives, King Arthur, Anchorman, I Robot, Vanity Fair, Stage Beauty, Around the Bend, Team America: World Police, Eulogy, Sky Captain & World of Tomorrow, The Alamo, Head in the Clouds, Beyond the Sea. (19)

Seeing It Thursday Night (nope…no room at the premiere!), although I’m presuming it’s at least agreeable, even though costar Dustin Hoffman referred to it as “this thing” : Meet the Fockers (Universal).
Stand-Alone, Belongs-In-Its-Own-Category Appalling: The Passion of the Christ (Newmarket)…although Caleb Dsechanel did a nice job of shooting it, and Jim Caviezel was quite good as Yeshua, although I got really tired of watching him get slugged or whipped 170-something times.
Don’t Wanna See ’em…Maybe on a Plane!: Lemony Snicket’s A Series of Unfortunate Events (Paramount), The Spongebob Squarepants Movie (Paramount), National Treasure (Touchstone), Blade: Trinity (New Line). (4)
As I’m rushing to finish, I have a feeling I may be leaving out a couple of major titles that I’ve seen and simply forgotten to mention. Any help in this regard will be appreciated.

I’ve just come up with a way to fix Finding Neverland, which I thought was an awfully nice and sweet film, but also dead boring because it felt overly genteel and mannered, almost to the point of constipation. It’s the kind of thing that gives “sensitive” a bad name.
What this movie needs is story tension, and if this were 2001 or ’02 and the movie hadn’t been made yet here’s how this could be done: Make Johnny Depp’s J. M. Barrie character into an unambiguous child molester.
Although there is no basis for believing the rumors, Barrie has long been suspected of having harbored suppressed feelings for children. (The evidence is that he never was a “short eyes,” and that he was probably asexual.) And yet everyone has heard the stories, and Finding Neverland acknowledges this undercurrent in a scene in which Barrie’s friend, Arthur Conan Doyle (Ian Hart) warns him of gossip that he may be molesting Kate Winslet’s sons.

I just know that if you want to make a strong film you sometimes have to throw the facts out the window and make the piece play on its own dramatic terms. You have to be willing to lie, distort…whatever it takes to make it work.
Obviously the copyright holders of Barrie’s Peter Pan (the playwright gave the rights to the administrators of London’s Great Ormond Street Hospital for Children in 1929) would turn into Palestinian terrorists if Neverland director Marc Forster had urged David Magee to take his script (based on a play by Allan Knee) in this general direction, but making Barrie into an actual child molester would for a fascinating character study.
On one hand you would have Barrie, a British playwright, pretending to believe in the inner lives of children and never growing up, but in fact being a conflicted man who doesn’t see himself as a monster but is, in the eyes of any knowledgable parent of any child who might come into contact with him, precisely that.
And yet Barrie is also a man who created a work of lasting art that captured the mindset of eternal youth in people of all ages.
He would be, in short, a child molester who understood kids better than anyone else of his era, and who created a piece of lasting emotional import out of his intimate knowledge of where kids emotionally live. Obviously the tension between these two ways of reading Barrie would yield a profoundly strong dose of something.
Along with some repulsion, probably. And financial panic, undoubtedly, for the Great Ormond Street Hospital. (Of course, the child-molester version of Finding Neverland could never see the light of day, as the hospital’s lawyers would probably sue the producers and stop the film from even being made, much less distributed). But if this darker tale had been shot it would have made for a much better story, and a much better film, than the version currently playing.
If you’re going to be a true artist, sometimes you have to willing to be a prick and make nice people call their attorneys and provoke others into standing outside your home with picket signs.

Pigs in the Sky

There is one excellent way to tell if a person is half-civilized, but you have to fly with them coast-to-coast in the cramped coach section of a major airline like Continental to find out.
I would never dream of reclining my coach seat all the way back (i.e., into the sleeping position) for a fairly simple reason. To do this would invade the personal space of the person behind me to a gross and obnoxious degree, and because he/she would also be unable to eat or work on their laptop on the back-of-the-seat tray table because of the sharp angle created by my rude interference.
On the other hand (or should I say on the other planet?), there are those who routinely push that button on their armset and recline their seat all the way back, and the courtesy considerations I’ve just pointed out don’t even occur to them. 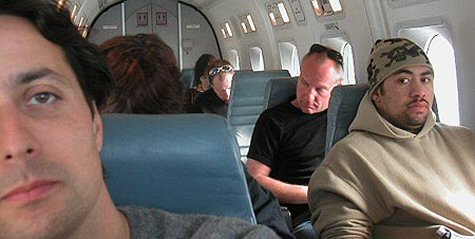 When I ask them to please not do this they always say, “Why don’t you just lean your seat back?” And I always say to them, “Because then I’d be doing the same rude thing to the person behind me, and I don’t think it’s cool to mess with their space.”
When that fails to work (as it always does), I say to them, “I have an even better idea, if you don’t mind my saying this. Why don’t you just — hello? — not lean your seat back so far in the first place, and everyone can try and respect each other’s territory?”
And their answer is always, whether phrased in these words or not: “Nope, I paid for this seat, my comfort is my own issue, and I’m entitled to lean it back as far as I want.”
And then I say, knowing full well my words are falling on deaf ears: “I have a news bulletin for you, chief — we’re not sitting in first class, and you are increasing the levels of psychological oppression that airlines are willing to impose on their budget-conscious travelers by putting them in pigmy-sized seats in the first place, so please, I’m asking you nicely — try and show some consideration.”
Most people who’ve made it past the tenth or eleventh grade in high school know that humans need a minimum of 18 inches of free head space in all directions in order to feel relatively calm and un-invaded. It’s a basic animal thing. Coach sections in airplanes are, of course, constructed in perverse defiance of this.
Do I ever lean my seat back? Yeah…somewhat. But never all the way. Even if I’m on a red-eye and everyone’s sleeping. Why? Because maybe the guy behind me might not want to sleep. I’m different, I guess. Concern about the feelings and comfort levels of those nearby actually occurs to me.
I haven’t been in a fist fight with anyone since the seventh grade, but the urge to get physical with these all-the-way-back types has been pretty strong, I have to say. But I always forget about it by the time we’re at the luggage carousel.
You can’t teach adults to be civilized. Either their parents drilled it into them when they were seven or eight, or they didn’t. I wish I had enough dough to fly first-class, or at least business.

December 15, 2004by Jeffrey Wells2 Comments
« Previous post
And I know I asked
Next post »
Uma Thurman is arrestingly focused