Usually if I go to a comedy and don’t laugh, I’ll wind up writing it’s no good or that I hate it, or both. Well, a different thing happened with Talladega Nights: The Ballad of Ricky Bobby (Columbia, 8.4). I didn’t laugh much at all — two or three titters, a couple of chuckles — but it’s not a bad film. I respected it. It’s quite smart, very hip and a piece of searing social criticism.
I just didn’t laugh. Well, barely. A critic sitting next next to me was shrieking — you should have heard the sounds he was making — and I sat there like one of those statues on Easter Island. 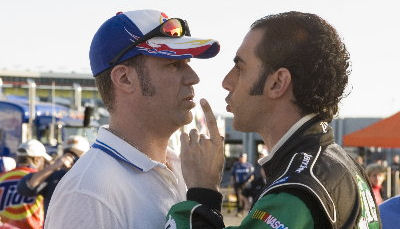 I’ve seen Little Miss Sunshine three times and felt light and tickled each time, but that’s a film about real people. I recognized every character from my own life, and it kept reminding me of how folks actually are and how pathetic and yet hilarious it can all seem. Talladega Nights is all about stereotypes. There’s not a real person in the whole thing. That’s not a bad strategy on Will Ferrell and director Adam McKay’s part — it’s just the way they decided to go.
Except their humor is impersonal. It isn’t about human foibles and quirks and peculiarities. Every last character in Talladega Nights is an archetype or cliche. It never gets “real” or down to earth. (Same deal with their last film, Anchorman.) Nobody exudes any kind of quiet, settled-down ordinary-ness. Again, this isn’t a problem. McKay and Ferrell know what they’re doing. And they decided to do a Southern social-critique thing and write all the characters as eccentric twits or douchebags or styrofoam heads. A lot of people are going to find this quite funny…whatever.
< ?php include ('/home/hollyw9/public_html/wired'); ?>
Joke after joke, scene after scene, Talladega show us what total fools white-trash Southern hee-haws are. It says they’ve got no real values and they care only about conspicuous consumption, and that all they like to do is tear around in muscle cars, buy new stuff, serve their kids junk food and go apeshit at NASCAR races. And it doesn’t let up.
The irony, of course, is that Tallageda is expected to play much stronger with red- staters than anyone else. The people it shits on the heaviest are going to be its biggest fans.
It actually goes a little too hard on the folks down there. Talladega is really mean. Mort Sahl said the cruelest jokes are the funniest, but there’s a limit. I wanted to find a Southerner and gived him/her a hug after seeing it. 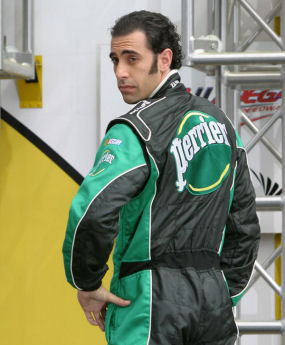 I love all kinds of things about the South. Southern life doesn’t have to be about vulgarity or voting for Dubya or hating the environment. But when it comes to driving fast cars I’m more of a Last American Hero type than a Dukes of Hazzard guy. And when it comes to comedies I prefer everyday average realism as a starting ground.
I haven’t really laughed at anything Will Ferrell’s done since he did his George Bush impressons. He makes me smirk at times. Maybe if I went back to smoking dope I’d find him funny, but I’ll never get high again so that’s that
I loved Sacha Baron Cohen as Farrell’s arch-nemesis, a gay French race-car driver named Jean Girard. In fact, now that I’m thinking about it, I did laugh at Talladega when Cohen was on-screen and cranking. I can’t make myself feel much enthusi- asm about anyone or anything else in the film. While I was intellectually apprecia- ting what Ferrell and McKay were up to, this movie was also making me feel para- lyzed. At times I felt like I was hibernating. I felt like a bear. At times I was making hibernating-bear snoring sounds.
I was roused out of my slumber when Ferrell stabbed his left leg to prove to his friends he’s actually paralyzed, even though it’s psychosomatic. And I chuckled at an insert shot of a French-language cover of “L’Etranger” by Albert Camus. And I half-snorted at a fake Eleanor Roosevelt quote in the beginning.
But I spent a lot of time dreaming about things I’d like to do and places I’d like to see before I sleep. This movie isn’t giving me anything, I was muttering to myself. It’s not bad and I respect Ferrell and McKay, but it’s eating up two hours of my life. 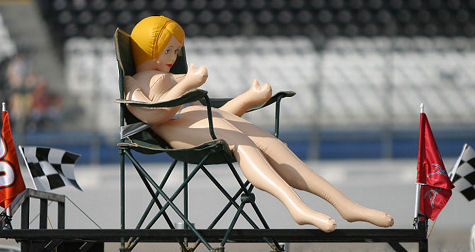 I left about five minutes before it ended (it didn’t matter) and as I was walking up the aisle I saw a woman sitting in the back row, and talk about a morose expres- sion. This woman wasn’t thinking about places she’d like to visit — she was think- ing about whether she felt better about a bottle of Seconals or a sharp razor blade in a warm tub. Every time I think about Talladega Nights that woman’s face is going to come back to me.
I really do love the South in a lot of ways. I love Savannah, Georgia, and those fine old rural plantations with their mossy tall trees. My grandfather came from a Kentucky horse farm, and something about that probably softened my feelings about rural Southern life. I’ve always felt a kind of love for Lyndon Johnson, deluded and self-destructive as he was, in part because he reminds me of my grandfather. I’ll always love young Elvis (the ’54 to ’57 version). I loved Tommy Lee Jones’ char- acter in Coal Miner’s Daughter. And I’ve always love those fatty Southern foods and the way those earth aromas fill up if you stand in some rural area late at night and just breathe them in.
I guess I’m acknowledging in my usual half-assed way that Talladega Nights really is a Southern culture trip, and all the brassy vulgarity it shows made me think about the aspects of Southern life that are getting lost and smothered by corporate forces…the same thing that’s happening everywhere to American small-town life.