As Time Goes By

Those connected with or working for Julia Roberts and her about-to-open film, Duplicity, have to be grinding their teeth about a nip-nip snark piece by Newsweek‘s Ramin Setoodeh that asks, “Is Roberts over?” They have to be especially chagrined about such a piece appearing a day before the big New York premiere of Tony Gilroy‘s deceptive brain-tickler and six days before it opens nationwide. 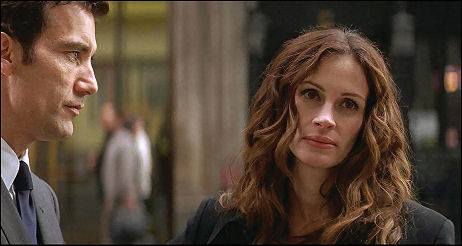 The answer, as I’ve written, is yes, time moves on but no, Roberts isn’t “over.” She is, however, in her Bette Davis/All About Eve phase now, which probably means she’s no longer a stratospheric box-office draw. She puts fewer butts in seats, but that’s still a valuable asset if you grade this attraction on the curve of her marquee power-that-was. She’s still “Julia Roberts” but in a more mature (tougher, steelier, suffer-no-fools) guise. Which basically means she’s become someone else. Which is cool.

Roberts is returning to the screen “after essentially taking five years off to raise her three children,” the Newsweek piece begins. The problem is that things have changed in the interim. One, the romantic comedy genre, in which Roberts has enjoyed her biggest successes, is “practically on life support.” Two, movie stars “have become a dying breed.” And three, Roberts hasn’t opened a successful film in eight years — i.e., since ’01’s America’s Sweethearts.

On top of which Roberts is “Hollywood ancient” — i.e., 41 years old — and, in Newsweek‘s view, a ’90s relic. (That was then, this is now.) Plus “it’s almost impossible for a woman to drag her date to a chick flick,” the article claims. Is this because Sex and the City, Mamma Mia and He’s Just Not That Into You were so awful that males have come to believe that the bottom has fallen out of chick-flick badness?

Plus her strict sense of privacy seems out of synch, the piece notes, “in this age of TMZ, celebrity blogs and phone cameras in every restaurant. It’s amazing how much we don’t know about her. Does anyone remember what her husband, Danny Moder, looks like? Even her children are virtually anonymous, which is quite a feat in our Shiloh– and Suri-crazed world. This is all great for Julia, but it may not be great for her career now that saturation media exposure has become the one-a-day vitamins of any healthy Hollywood career.”

Your husband’s face has to be commonly recognized and photos of your kids have to be in Vanity Fair and People in order to fortify your movie-star credentials? I feel nauseous.

But the observation about movie stars being a dying breed is more accurate than not. And it’s satisfying to once more hear that guys are totally refusing to be dragged to chick flicks.