Critics who’ve seen Joe Wright‘s Atonement (Focus Features, 12.7) have reacted with breathless superlatives,” according to the Daily Telegraph‘s amiable and usually accommodating David Gritten, “and its showing at the Venice Film Festival and subsequent release will almost certainly catapult Wright into the ranks of world-class film directors.” 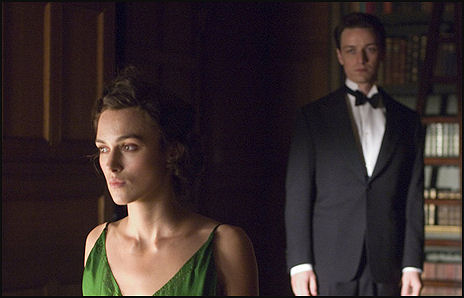 Oh, yeah? I’ve heard some reactions also and no one’s said anything about viewers doing cartwheels in the lobby. What I’ve heard is “pretty good,” “not at all bad” and “has at least one really good extended tracking shot.”

One also has to consider the unfortunate fact that the two romantic leads, Keira Knightley and James McAvoy, are not only limited talents but have physical traits and tics that can arouse huge irritation at the drop of a hat.

I had trouble with McAvoy in The Last King of Scotland because of his pathetic hunger and eagerness to charm (i.e., that Hugh Grant thing) and his unfortunately large bee-stung nose. I wrote McAvoy off for dead after seeing him in last year’s Starter for 10, a dreadfully cloying and unseductive film. However good Wright’s new film may turn out to be, McAvoy is more or less “over” — he had his fifteen minutes in ’06, and the world has moved on.

I wrote Knightley off two years ago as an overpraised and under-talented actress who has that flirty thing down but lacks an essential inner aliveness, that river-of- feeling quality that all good actresses have.