All ahead-of-the-curve, festival-attending journalists in New York and Los Angeles want to be up to speed on Abdellatif Kechiche‘s Blue Is The Warmest Color before the rumpus starts. Sooner rather than later, I mean. The 2013 Palme d’Or winner, which I’ve been calling “the Cannes lesbian movie” or just “the lesbians,” is playing Toronto and is also expected at Telluride. But everyone wants to bag it early because it’s the hot thing to see (especially for those who missed it last May) and because nobody wants to wedge a three-hour film into a hectic film festival schedule — too much of a time chunk, eats into other screenings. There are at least three lesbian screenings happening this month in Los Angeles, and I’m naturally assuming that New York journos are being offered the same access. If I was working for Sundance Selects I’d be delighted by all this attention.

It’s too bad that Blue won’t be eligible for a Best Foreign Language Oscar due to it not being the official French entry because of a release-date technicality. (This, at least, is what Deadline‘s Nancy Tartaglione reported a couple of months ago.) Even with the sex scenes it’s hard to see how even the Academy’s notoriously unhip, fuddy-duddy foreign-language committee wouldn’t at least put this on their short list, if not consecrate it with a nomination. 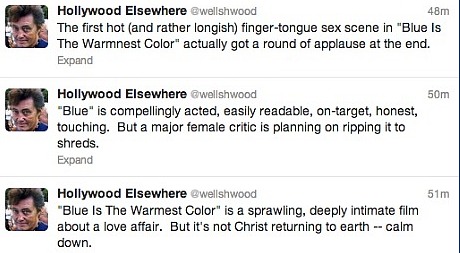 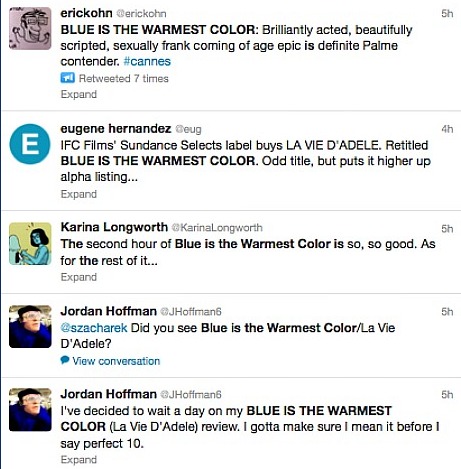