23 or 24 minutes worth of 3-D Avatar footage were shown at Comic-Con this afternoon. And it should come as no surprise to report that this taste of James Cameron‘s 3-D action fantasy, set on a foreign planet and involving a primal conflict between militaristic humans and a race of ten-foot-tall aliens called Na’vi, played serious wowser. As in “Jesus, this is something…oh, wow!…crap, this is new…oh, that‘s cool…this is so friggin’ out there and vivid and real…love it all to hell.”

Cameron announced at the end of the presentation that the rest of the world will have a chance to sample Avatar in a similar way on Friday, August 21, which he called “Avatar Day.” On that day IMAX theatres coast to coast (and, I presume, in various foreign nations) will show about 15 minutes worth of 3-D IMAX footage of Avatar to the public for free. I guess the footage will be shown at successive shows all day and into the night, and that some kind of ticket reservations system will be set up.

The 3-D photography that I saw this afternoon is clean and needle-sharp and easy on the eyes, and the CG animation looks as realistic and organically genuine as anything anyone might imagine, and which certainly seems to represent the best we’ve seen thus far.

6,000 people watched the show inside the San Diego Convention Center’s great Hall H, and then sat for a brief but informative presentation by Cameron, producer Jon Landau and costars Zoe Saldana, Sigourney Weaver and Stephen Lang with a video apearance by costar Sam Worthington.

Cameron described the film as both a meditation on the wrongness of any effort by any military to conquer and suppress people in their native land, and a sci-fi adventure that will appeal to the proverbial 14 year-old boy in all of us. (Girls too.) 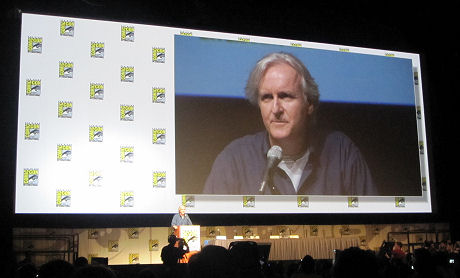 Set in the 22nd Century, Avatar (20th Century Fox, 12.18) is an allegory piece about militaristic/industrial-minded humans messing with and thinking about destroying a race of tall blue warrior aliens called Na’vi, who are peaceful unless attacked. In order to head off conflict between the Na’vi and the U.S. military, Weaver’s botanist character invents a technology that genetically engineers human/Na’vi hybrids, called Avatars.

The story involves a crippled Marine named Jake Sully (Worthington) volunteering to be transformed into an Avatar on Pandora in order to mingle with and understand the Na’vi. In so doing he falls in love with a Na’vi princess (Saldana) and gets all caught up in the conflict between her people and the bullshit U.S. military.

I was transported, blown away, melted down, reduced to adolescence, etc. I mean, I saw some truly great stuff.

But I need to share one thing. As drop-dead awesome and mind-blowing as Avatar is in terms of super-sophisticated CG animation — a realm that looks as real as anything sitting outside your window or on the next block or next continent — the bulk of it does appear to be happening in an all-animated world.

Which means that after the first-act, live-human footage (i.e., laying out the plot basics, preparation for the Na’vi transformation, etc.) the film seems to basically be a top-of-the-line animated action-thriller. 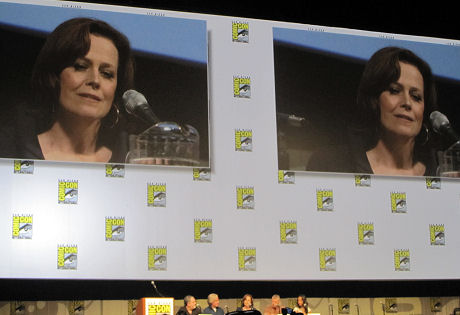 Which means that once the visual climate and atmosphere of animation begins to settle in, we’ll be watching something that’s cool but one step removed from a “real” world. Which means that for people like me, Avatar, beginning with the portion of the film in which the animation pretty much takes over, may not finally feel like a really solid and true-blue high-throttle experience because — yes, I realize this dates me — it lacks a certain biological completeness and trustworthiness.

To put it another way the visual dazzle element will be wondrous, but the trust element (a reference to Werner Herzog‘s statement about things have gotten to a point at which audiences don’t trust their eyes any more) will be in constant “hold.”