“The Avatar battle scenes are spectacular and thrilling,” writes Envelope/Gold Derby’s Tom O’Neil, “but the movie’s greatest fight lies ahead at the Academy Awards.” O’Neil’s Oscar pundit polls, conducted today, suggest that Avatar is suddenly a likely Best Picture contender, but James Cameron‘s film “will probably trip up in the home stretch” due to the Academy’s old-fart contingent. 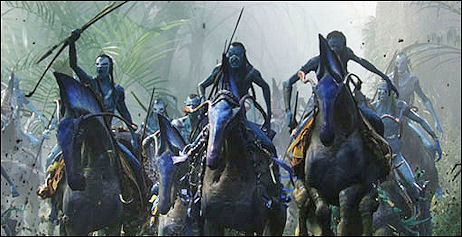 “Last year’s critically cheered blockbusterThe Dark Knight didn’t even get nominated for best picture,” he notes. “But now there are 10 slots in a weak year, so Avatar can’t be denied its due place on the derby track.

“But Oscar voters are stubborn, narrow-minded graybeards. Computer-generated fantasy films, however amazing, aren’t ‘important’ in their eyes. They like their best pictures real. Sure, Lord of the Rings: Return of the King won the top prize and indeed went undefeated in all 11 categories, tying the record for most wins held by Ben-Hur and James Cameron’s Titanic, but that was only because the franchise wore voters down over the years.”

I hated, hated, hated the Lord of the Rings trilogy. I sympathized with the resistance to it. I mostly found it agonizing to sit through