Magnolia is releasing Anne Sewitsky‘s Happy Happy in New York and Los Angeles on 9.16, and it’s now starting to be shown to journalists. But there’s no subtitled trailer to be found on YouTube, the film isn’t listed on ComingSoon.net, and it can’t be found on Wikipedia. So here’s the 2010 Norweigan trailer. It’s pretty easy to tell what the film’s about, and the tone of it.

Happy Happy is a sexual comedy of sorts, but not in the American sense. It’s a frank, plain-spoken, curiously skewed film. It’s “funny” but not silly or scatterbrained. It is not devoid of drama. It contains real people and hard confrontations, etc. It should be remembered that it won the Narrative World Cinema Jury Award at the 2011 Sundance Film Festival.

I saw and quite enjoyed Happy Happy at Sundance 2011. It’s not fluffy but it’s not too heavy either. It’s about a mad intoxicating affair (is there any other kind?) between a lovely, optimistic-minded housewife (Agnes Kittelsen) and a recently arrived married neighbor (Henrik Rafaelsen). There’s a certain humorous emphasis in the film, it must be said, on oral sex. A somewhat brazen emphasis, I should add. There’s no seeing this film and not remembering this aspect.

The affair is eventually found out, of course, as all affairs are. Particularly those taking place in a small town. The trick for any infidel is to be as covert and CIA-like as possible. I know — I was the other man in an extra-marital affair that lasted more than two and a half years. It was painful and glorious while it lasted. No regrets at all. The heart wants and needs what it wants and needs.

“Kittelsen’s performance is the linchpin of the film — her open, emotive face reveals as much about her thoughts as her poor impulse control,” wrote The Hollywood Reporter‘s Justin Lowe. “Whether cavorting with her new lover or probing her husband to share his emotions, her expressive performance easily draws the audience in.

“Sewitsky directs the performances and camera with confidence and flair, although the succession of Christmastime interiors is rather repetitive, in contrast to the exterior scenes, which breathe fresh dynamism into the pacing.” 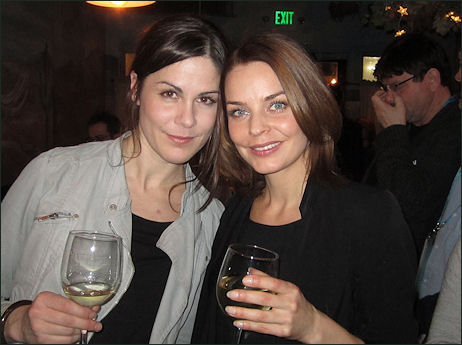 August 18, 2011by Jeffrey Wells4 Comments
« Previous post
Don't Look Back
Next post »
"You Can Throw Out Everything Else!"