Now that the World Series is over and the N.Y. Yankees are world champions (first time since 2000, 27 wins overall), I feel free to ask a question I’ve had on my mind since the series began: why do so many baseball players these days have the bodies of linebackers? What happened to the concept of pitchers and catchers and shortstoppers being relatively trim and, well, athletic-looking? 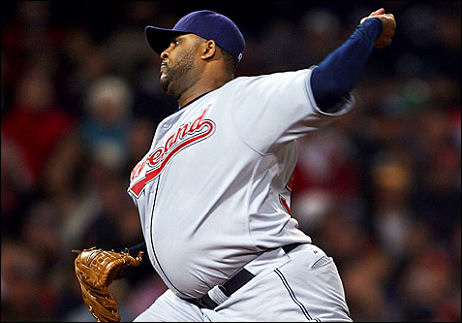 I’ve been looking at pitchers the last few days who almost look like sumo wrestlers trying to lose weight. Seriously, half of today’s players look like Babe Ruth, and he used to be a total stand-out in his era — the swaggering, jowly-faced slugger with a big pot belly. Nobody looked like that in the old days except the Babe. And yet some of today’s players make Ruth’s physique seem relatively contained.

All I know is that once upon a time they all used to look like Lou Gehrig or Joe DiMaggio or Mickey Mantle or Whitey Ford or Reggie Jackson or Don Mattingly or Derek Jeter. Guys who didn’t exactly have lithe Olympic-swimmer bodies but who at least seemed to have the ability to show restraint when they ate.

When I played softball as a kid we’d make fun of a kid named Brendan McCran, who had portly tendencies. We used to call him “the fatter batter.” This wouldn’t happen today because Brendan-sized kids and professional players have become the norm.

It’s the culture and the fatty foods out there, of course, and the fact that most American males are fat or least seriously beefy-looking. Outside of aesthetes and fat-recoil types like myself we’ve all come to accept bulk and girth as the social/cultural norm, and bit by bit this has crept into professional baseball culture, and now it’s almost gotten to a stage in which the average player looks like early-SCTV-era John Candy or Dan Blocker (i.e., “Hoss”) from Bonanza. 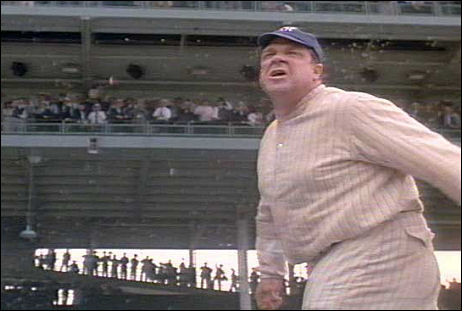 It takes a non-baseball fan like myself, a guy who might go to a game every two or three years (I love sitting alongside the third- or first-base lines and smelling the earth and the damp grass) and who only watches baseball games during the World Series to stand and notice stuff like this. The regular fans don’t say anything about lardbucket players because they’ve slowly been conditioned and made the adjustment. But I remember and I know. Baseball players used to be guys who looked like they were in some kind of shape. Obviously Alex Rodriguez looks fine, but you’ve got tons of barrel-gut types out on the diamond these days. You can’t tell me I’m wrong.

Side-issue: I also don’t like the way everyone seems to have dropped the high-sock, calf-leg, knee-britches thing that baseball players wore for decades. Now they just wear these droopy, dopey-looking pants that look like pajama bottoms. What are they going for, comfort? No flair or sense of style. (Again — this is from someone who doesn’t watch baseball all that much. I realize this has been more or less the norm for years.)