The Reeler’s Stu VanAirsdale reported this morning that the Tina Fey/Amy Poehler comedy Baby Mama (Universal, 4.25) will open the Tribeca Film Festival on 4.23. It’s about the blue-collar Poehler becoming the surrogate mother of the affluent Fey’s child…whatever. Maybe it’ll rock, and maybe it’ll be a feast of “heh-heh” humor. 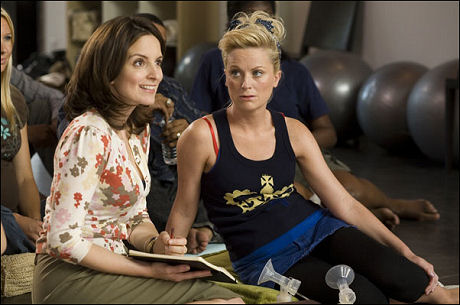 I need to be upfront and confess that unfair as this may sound, a certain part of me would like to see Baby Mama go down as a kind of karma payback for Fey’s Hillary shilling. It’s a small-time thing to say, I admit, but I do feel this way. Fairly strongly, truth be told. But if it’s good I’ll say that and I won’t let this other stuff in.
If nothing else the primary season has been an education about what it feels like to be caught up a tribal feud, and in the grip of excessive hatred that probably isn’t good for my soul or my health. As the Palestinians feel about the Israelis, as the Bosnian Muslins feel or felt about the Serbs, as the Sunnis and the Kurds feel about the Shiites and vice versa, I feel I now understand.