Whoever handled the transportation for the Wild Bunch’s Che party last night — i.e., arranging for rides from the front of the Miramar to Villa Murano, which is apparently way up in the damn hills — is inconsiderate and incompetent. The invitees were told to assemble on the corner in front of the Miramar. I arrived a little bit late (two women had been there for 20 minutes at that point), but for 40 minutes roughly 35 or 40 people waited around for a shuttle that never came. 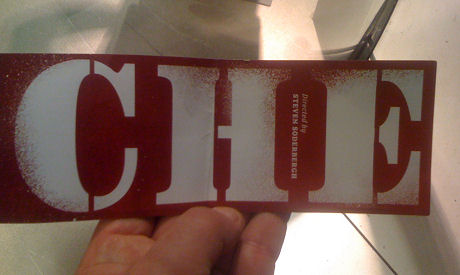 Just after the 40- or 45-minute minute mark one lousy black SUV with the words “Villa Murano” pulled up and five or six people got in. That’s it? If the Wild Bunch person behind the transportation arrangements had for some reason intended to exasperate, insult and anger the invitees, this is exactly what he/she would have done. Congratulations, Wild Bunch!
I don’t know when I’ll find the time to sit down and write something longer and more exacting about Steven Soderbergh‘s Che movies — maybe this afternoon.