The September release of the 50th anniversary Ben-Hur Bluray will, of course, arrive almost 52 years after William Wyler‘s film opened on 11.18.59. So the marketing exec who decided to call it a “50th anniversary” release was tripping on something. His own ass-fumes? 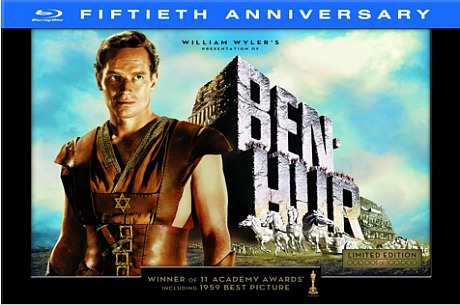 The 212-minute-long Oscar-winner, restored from the original 65mm negative and remastered in 1080p, will be contained on two discs along with (a) a commentary track recorded by film historian T. Gene Hatcher and star Charlton Heston, and (b) a music-only track containing Miklos Rozsa‘s award-winning score. Plus a feature-length “making of” documentary including never-before-available images and footage from the Heston family archive, and the 1925 silent Ben-Hur with Ramon Navarro and Francis X. Bushman.

June 7, 2011by Jeffrey Wells36 Comments
« Previous post
If You Still Haven't Gotten It…
Next post »
Attack of the 150-Ft. Ghost Mermaid