Summer blockbuster fatigue is so last month. As I noted a week or so ago, if you’re a journalist in the swing of screenings of new films, it’s basically the fall now. It’s after Labor Day, jacket weather, the Toronto Film Festival starting and fall foliage is just around the corner in Vermont. The Dumb Season is over and done with so why run a groan piece now? 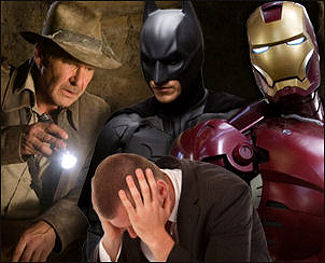 “Why has the summer of 2008 seemed exhausting in a way previous summers haven’t?,” asks Salon‘s Stephanie Zacharek. “The summer-movie season, which used to begin in June and would be finished by the last week of July, after the release of all the big ‘event’ movies, now begins in early May and is beginning to creep well into August — the movie equivalent of the endless presidential election season.”
“This year, it kicked off with one whimper (Speed Racer) and also with one bang (Iron Man). But the movies of summer 2008 seemed to become bigger, noisier, more ambitious and more expensive with each passing week. By the time The Mummy: Tomb of the Dragon Emperor limped into theaters on Aug. 1st, trailing lots of sand and dead skin behind it, audiences could be forgiven for feeling fatigued.”