A curious blend of wartime realism, undercover- spy suspense and almost exploitation-level sexuality, Black Book (Sony Pic- tures Classics, 4.4 in NY and LA) is Paul Verhoeven‘s strongest and most fully-felt film since Robocop (’87) and before that Soldier of Orange (’77). This World War II thriller — a surprise — is one of the three genuinely first- rate ’07 films so far, along with Zodiac and The Lives of Others. 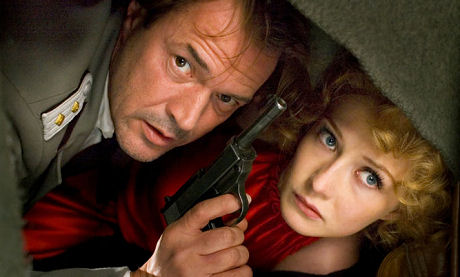 Set in late 1944, it’s basically a revenge piece — a saucy Dutch lady named Rachel Stein (Carice van Houten) bonds with the Dutch resistance in order to stick it to the Nazis who murdered her parents in cold blood. (For profit, as it turns out.) She goes undercover as a worker at SS headquarters, and eventually as the lover of a local SS commander (Sebastian Koch), which is further complicated when she falls for the guy in earnest.

It was a smart move for Verhoeven to return to the Dutch turf from whence he came. It obviously made sense from a spiritual as well as a “back to roots” perspective. Over the last 20 years he’s been one of the biggest envelope-pushers in the realm of the salaciously sexual (Basic Instinct, Showgirls) and the ultra- violent (Starship Troopers, The Hollow Man), but there’s been a sense for some time that Verhoeven’s well has been running dry. I said to myself a long time ago (somewhere between Showgirls and Starship Troopers) that he’s probably “over” — wrong!

Black Book is a stab in the direction of Roman Polanski‘s The Pianist — a WW II drama partly fuelled by Verhoeven’s own experiences while growing up under the Nazi occupation.

Black Book is tight and well-crafted and finely tuned, but yet it’s clearly a cranked- up thing. It doesn’t strive for the stark realism or solemnity of The Pianist — it’s an entertainment about intrigue, sex, betrayal and the constant possibility of sudden violent death at the hands of the bad guys. 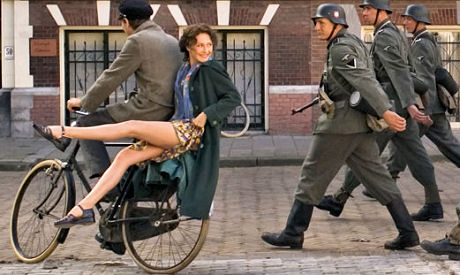 And even that’s not what it seems. There are one or two plot turns that remind us that even in World War II, one of the most clear-cut, good-vs.-evil conflicts of the 20th Century, filthy lucre rules and the defining of good vs. evil will always flow from that.

Verhoeven’s feverish plotting and energetic shooting and cutting keep it all going, and Van Houten’s spunk and sexiness provide much of the flavor and panache, Black Book has a few sex-and-nudity scenes (par for Verhoeven) and that’s always agreeable, although the notion of hot bods and fired-up loins argues strenuously with the horrific realities of Nazi-occupied Holland. In my head, at least.

Koch, the conflicted playwright in The Lives of Others, plays a decent Nazi who’s lost his family and has succumbed to a resigned sadness about the scheme of things, and hence a kind of humanity. (Buy it or don’t.) Halina Reijn, who plays Rachel’s sexually active friend (she’s the lover of a flabby-bellied Nazi pig), holds her end up nicely.

I just wish I could find a website that tells the real story, or the one that inspired Verhoeven and co-writer Gerald Soeteman to write the Black Book screenplay. 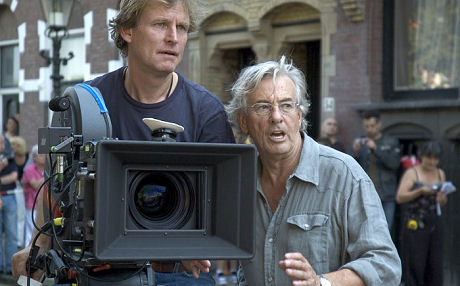