TMZ has a transcript and an audio file of Alec Baldwin ripping into his 11-year-old daughter, Ireland (he calls her a “thoughtless little pig” at one point) and trashing her mother Kim Basinger. The tape has either cost Baldwin his visitation rights or threatens to, but either way there are anger-management techniques that work, and there’s always standard psychotherapy. 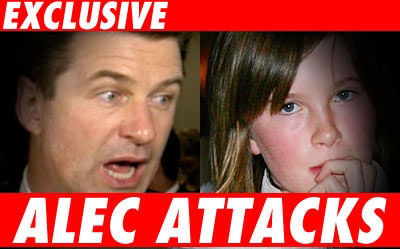 It’s conceivable, of course, that Baldwin’s tirade may have been about daughter acting spoiled and dealing with him like a egoistic tweener prima donna…maybe. She wouldn’t be the only child of a celebrity to turn out this way. But Baldwin sounds like he can’t emotionally control himself on the tape, and that’s the bottom line.

This is worse for Baldwin than that YouTube yelling tape was for director David O. Russell because at least Russell was ranting at grown-ups.

Update: Baldwin’s rep put out a statement this afternoon, as reported by Extra:

“In the best interest of the child, Alec will do what the mother is pathologically incapable of doing…keeping his mouth shut and obeying the court order. The mother and her lawyer leaked this sealed material in violation of a court order. Although Alec acknowledges that he should have used different language in parenting his child, everyone who knows him privately knows what he has been put through for the past six years.”