I’m sitting in my Cannes apartment, damp and chilled from the rain and trying to get Amat Escalante‘s Heli out of my head. It’s a starkly drawn, no-frills, deeply ugly Mexican art film about the ravaging of Mexican society by drug traffickers and how poor people always take it in the neck. I respect Escalante (Sangre, Los Bastardos) and his austere mindset, but there would have to be something wrong with anyone who says they “liked” this movie. It uncovered every dark and fatalistic thought I’ve had about my life and about life in general, and generally sent me into a black-dog mood pit. 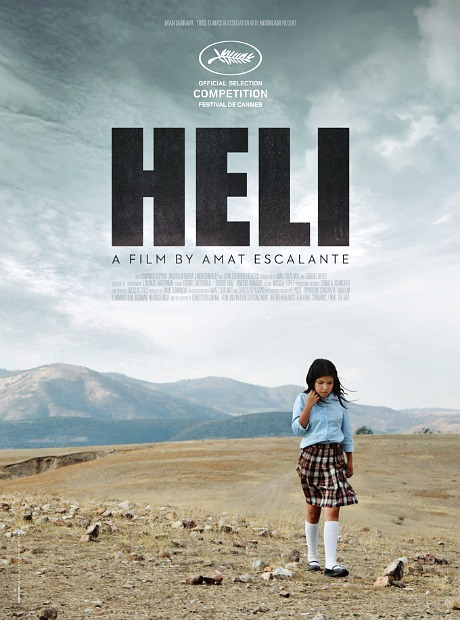 Heli is about a family of poor Mexican rurals living near the very lowest rung of everything — income, education, opportunity, consciousness. I would rather kill myself than live a life like this — no computers, no wifi, no Blurays, no film festivals, no love, no laughter to speak of. The movie is basically saying life for these guys goes from drab and depressing to flat-out ghastly due to the drug-dealing malevolence that’s poisoning much of Mexico.

What happens is that some bags of cocaine go missing and the drug baddies take revenge on a pair of no-accounts — Heli (Armando Espitia), a married mental flatliner who works a night shift at an auto assembly plant, and a dumb police trainee (Juan Eduardo Palacios) in his late teens or early 20s who’s actually looking to marry Heli’s 12 year-old sister, Estela (Andrea Vergara). Heli and the trainee get taken away and tortured by drug dealers, and at the end of the session the trainee gets hung by the neck from a bridge. Oh, and Heli’s dad gets shot to death.

But before this happens the trainee’s genitals are doused with lighter fluid and set aflame. Very realistically, I might add. And right before that the neck of a little white dog is snapped like a twig by the drug dealers — the audience yelped when this happened. And Estela is kidnapped by the druggies and sexually molested and impregnated. This is an animalistic landscape. A territory lorded over by serpents and psychopaths. It’s hugely unpleasant to watch, but I’ll give Escalante this — he shows violence as a brutally blunt and horrific tool. Which is exactly how it feels in real life.