I’ve been hating on Asian action aesthetics (i.e., John Woo blam-blammers, sword ballet flicks, martial arts anything) for roughly two decades, but over the last few years my disdain has been focused on the moronic taste buds and grotesque influence of the Chinese movie market. Particularly when combined with the popularity of videogame flicks. You could argue that adapting video games into features is a double-down strategy as fantasy tentpoles have been aping the videogame aesthetic for a good decade or so. Either way they seem a safe bet when you factor in the overseas market. 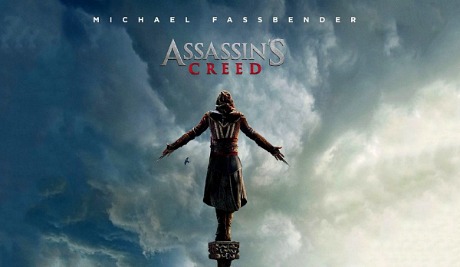 The next videogame biggie is Justin Kurzel‘s Assassin’s Creed (20th Century Fox, 12.21) with HE non-favorite Michael Fassbender (the chilly stare, the surly frown) playing the lead/cashing the check. Death to Assassin’s Creed, death to the creative visions of Kurzel/Fassbender (they made the gray, grime-gunky Macbeth together), death to the Chinese. I don’t really mean “death” — I just mean “thanks, guys, for cranking out and supporting this spreading mushroom-cloud influence upon cinema and world culture.” I’m sure all the participants will profit handily, and that swaggering Fassbender (who also produced) will be lighting his cigars with $100 bills when his participation checks begin to roll in.

Or maybe not. What do I know? Three days ago the European honcho for Ubisoft, the maker-distributor of the Assasin’s Creed videogame, told MCV reporter Christopher Dring that movies like Assassin’s Creed are not so much about making piles of box-office dough but about putting the brand in front of a huge international audience. A Ubisoft guy later walked this back, telling MCV that Kurzel’s Assassin’s Creed wasn’t just a marketing strategy but a “quality experience” in and of itself. Yeah, right.

July 11, 2016by Jeffrey Wells11 Comments
« Previous post
Will Clinton Essentially Ignore What The Whole Primary Season Was Largely About?
Next post »
Jean Luc Godard’s Return of the Eloi