I have this rough theory that leading men who’ve established themselves as appealing good guys and/or made it as movie stars shouldn’t play villains until they’re at least 45 or 50 (a la Jack Nicholson in The Shining and Batman, Harrison Ford in What Lies Beneath and Willem Dafoe in Speed 2: Cruise Control), and that an even better time to get into bad-guy roles is when your career is on the way down, or at least when it’s starting to lose altitude. 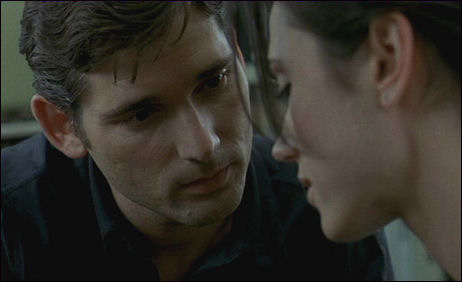 There are exceptions to every hard and fast rule, of course, so I’m not saying others haven’t played baddies (not flawed protagonists, but deep-dyed villains) at earlier ages and reverted right back to hero roles, but it’s relatively rare.

You can break into the big time playing a sexy, charismatic villain, of course — James Cagney and Humphrey Bogart did this, of course, and George Clooney began this way in From Dusk to Dawn — and then switch over to good-guy roles. But when a relatively young actor accepts a villain role after starring in only five or six features, the industry regards this as a kind of message. “I may not be a bona fide movie star after all,” it says, “and I may even be a character actor, or at least I’m willing to think of myself that way. The important thing is to act, to work…that’s what I care about. And if that means playing bad guys, cool.”

This is my reaction to Taiiana Siegel‘s Variety story about Eric Bana having signed on to play a vlilain called “Nero” in J.J. Abrams‘ Star Trek or Paramount. I really liked Bana in Lucky You and consider his performance in Chopper an absolute classic. I believe that he took a hit, however, from the triple-whammy of Troy (playing a character whose indecisiveness with his randy brother Paris helped bring about the Trojan War), Hulk (obvious reasons) and Munich (that bizarre sex scene at the end), and he never quite recovered, especially if you throw in the financial failure of Lucky You.

I’m trying to be dispassionate and just pass along what I got from Siegel’s story without dumping on Bana, whom I genuinely like. Is there a message in this or not?