“Barcelona” title is for real

Not a misprint, misunderstanding, misnomer or mis-anything: Woody Allen‘s Barcelona-based film, due in ’08’s late summer or early fall, is really going to be called Vicky Christina Barcelona — one of the most atrocious titles ever conceived by a first-rank film maker, regardless of subject matter, theme, metaphor or what-have-you. 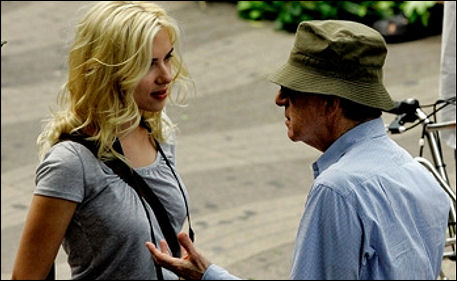 This on top of VCB being Allen’s third Johansson pic over the last four is, I suspect, giving even his most ardent admirers, particularly in the wake of the disastrous Scoop, an uncertain feeling.
The romantic triangle pic (Spanish painter Javier Bardem and two American expats played by Scarlett Johansson and Rebecca Hall) may, for all I know, turn out to be one of Allen’s very best. I just know it’s facing an uphill sereception with that title.
Risky Biz Blog’s‘s Steven Zeitchik has re-confirmed the VCB title in a recent post about Allen’s next film, which will be set, for a change, back in Manhattan.