To the great surprise of the Global Post‘s Paul Hockenos, Quentin Tarantino‘s Inglourious Basterds “has rocketed to the top of the German charts and even charmed the country’s most discerning film critics. When I showed up at my neighborhood theater in Berlin, the ticket line reached out to the curb. Once inside the jam-packed theater, I found myself as intrigued by the reaction of the German cinema-goers as I was by the film. 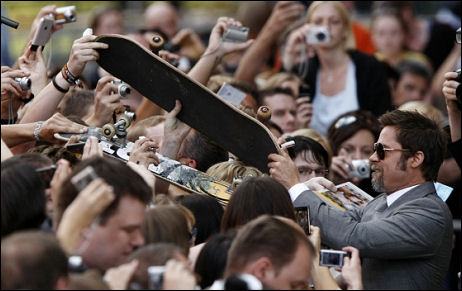 It is entirely fair and logical to assume that Brad Pitt, to go by his gray suit jacket and gray tie, was also wearing gray slacks and dress shoes when this shot was recently taken in Berlin, and not shorts, black socks and sandals.

“It was plain from the bursts of laughter and applause that they thoroughly relished all two-and-a-half hours of it, even though the graphic, blood-soaked farce would appear to break every German’s rule for political correctness. It’s a Nazi-era splatter film.”