“If you’ve gotten tired of seeing the names Helen Mirren and Forest Whitaker over the past month or so, well, so have I,” rants Reeler columnist Lewis Beale. “Worthy actors, for sure, and most likely Oscar shoe-ins, but the ubiquity of their mentions on Oscar prognostication lists has me feeling like one of those fuming cartoon characters, with steam coming out of my ears. 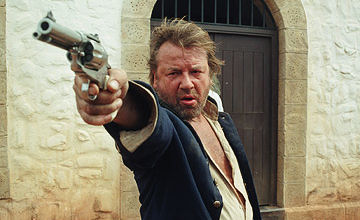 “How many times have we been told that Marty [Scorsese] might finally win his Best Director statuette, that Dreamgirls‘ Jennifer Hudson is a showstopping Best Supporting Actress contendah or that Volver could be nominated in multiple categories? No surprise that Oscar Season 2006 striking some of us as the Tinseltown equivalent of the famous Casablanca order to ’round up the usual suspects'”
Beale’s response is to nominate some unsung contenders in the major categories — The Proposition for Best Picture (sorry, Lewis, but I hated this film), Casino Royale‘s Daniel Craig for Best Actor, Phyllis Somerville for Best Supporting Actress in Little Children (hear, hear!) , Ashley Judd for Best Actress in Come Early Morning, and Ray Winstone in The Proposition (nope…too skanky & greasy, sorry…I far preferred Ray’s performance in Sexy Beast).