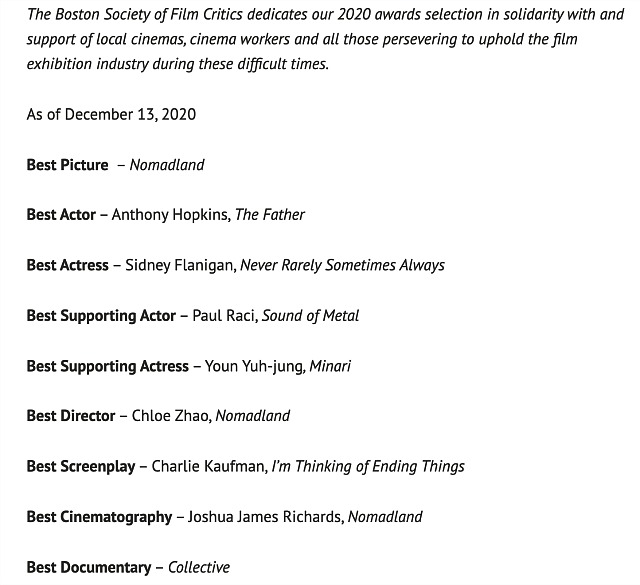 Flanigan’s less-is-more performance as a guarded, fearful woman in Never Rarely Sometimes Always is very rooted and deep-down. But in my 3.9.20 review I lamented that her “Autumn” character “is so buried, so shielded…so much so that Never Rarely Sometimes Always feels less of a sad tale about getting an abortion in NYC, and more of a study of Autumn’s isolation and defensiveness…about a prisoner living in her own cage and terrified of leaving it.”

Who would I have given the Best Actress award to instead? Either Michelle Pfeiffer in French Exit, Frances McDormand in Nomadland or Vanessa Kirby in Pieces of a Woman — all pretty much on an equal footing.

Excerpt from “Afraid So,” posted on 10.19.20: “Right here and right now, films are mainly being made and judged according to who’s in them, who made them and whether or not the right boxes have been checked.

“Critics are totally playing along with this, of course. Because they don’t want to be replaced.

“This is the ideological garrison state within which we all currently reside. What a film is ‘saying’ by way of story, theme and casting is almost all. Craft levels are appreciated, respected…but if they’re only so-so in this or that film, no one is going to get overly bent out of shape.

“Because ideology and social reflection are what matter. Say it correctly and assemble the package with the right collaborators, and you’re more than halfway home.”