Here’s the Film Forum page for Becket‘s one-week booking (1.26 through 2.1), and the MPI/Slowhand Cinema site for the restored film itself. It’s really too bad that there won’t be an opportunity to see Becket (it hits L.A.’s Nuart in early February) in bigger, swankier theatres than those afforded by Landmark Cinemas or the Film Forum — it’s a cerebral “big” movie and really should be seen at the Arclight or at some other spacious, tip-top venue. 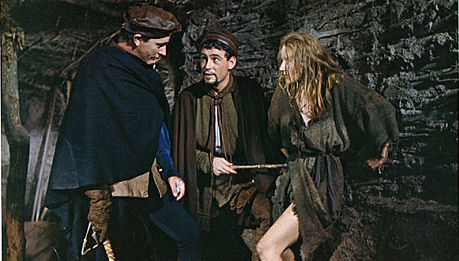 One other comment: the “Production Notes” on the Becket site [which was deactivated/shut down yesterday by MPI — brilliant move!] say that “due to massive popular demand by the public and industry alike, Becket is now brought to you by MPI, lovingly and beautifully restored with the help of the Film Foundation and the Academy of Motion Picture Arts and Sciences.” Let’s be clear on one thing — restoration-wise, MPI didn’t do diddly-squat. The restoration was done by Academy guy Mike Pogorzelski and largely funded by the Film Foundation — all MPI has done is make prints and handle the marketing of the theatrical release.