The Harry Ransom Center, an arts and culture study and archive branch of the University of Texas at Austin, has put up over 50 videos of “Mike Wallace Show” interviews from 1957, plus a selection of audio-only revisitings and transcripts. What a weird, constricted, almost repulsively narrow-minded world it seems to have been back then. Or at least, as far as what’s implied by Wallace’s questions and the answers he gets. 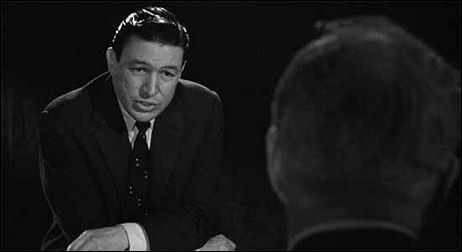 Wallace smokes constantly during the interviews and hustles Phillip Morris cigarettes like there’s a stern-faced Phillip Morris account executive standing just out of camera range. Where would Wallace have been financially back then without cigarette advertisements? He also sold Parliament cigarettes like there was no tomorrow.
The only half-agreeable clip I took the time to watch is of Wallace asking Kirk Douglas, who was then filming The Vikings, about hiring former Nazis and Communists. Douglas, obviously feeling a bit threatened but standing up nonetheless, basically replies that he doesn’t believe in persecuting people for past alliances, mistakes and/or errors of judgment. Good answer. Douglas and director Otto Preminger brought the curtain down on the black list three years later by openly working with screenwriter Dalton Trumbo.
Wallace later asks whether European or American women makes the best wives. These two politely joshing males could be talking about cars or haberdasheries or washing machines.
We’re all products and members of our immediate environment, but the people in these videos seem to be living in a kind of gulag — the Leavenworth State Prison and Siberan salt mines of 1957-style propriety and conformity. The implications of a guarded, button-down, autocratic world in these videos are positively stifling. And to think that I wasted over 45 minutes watching the damn things.
When I think of 1957 I think of the vitality and reach and yearnings of Elvis Presley, Paths of Glory, the original Broadway production of West Side Story, the debut of “American Bandstand,” Chuck Berry, Eugene O’Neill‘s A Long Day’s Journey Into Night, Fats Domino, Jack Kerouac, Jerry Lee Lewis, Night of the Demon with Dana Andrews, Mickey Mantle, Moose Skowron, the Dodgers leaving Brooklyn, Bob Dylan at age 16, Sayonara, The Tin Star, the original 3:10 to Yuma, the death of Humphrey Bogart, A Face in the Crowd, The Bridge on the River Kwai, A Hatful of Rain, Ben Gazzara in The Strange One, Little Richard, Twelve Angry Men, etc.
There are faint echoes of these events, artists, athletes and creations in the Wallace videos, I suppose, but the world that’s mainly conveyed is one of arch attitudes and forced viewpoints, and above all a cautious, corporate mentality filled with people who weren’t really on to what was starting to happen back then, and certainly not about where things would be in a few short years.
Thanks to HE reader Mike Gaertner for passing these time-wasters along. “Another notable moment,” he writes, “is when Wallace attempts to make Tony Perkins the poster boy of the beat generation (???). Perkins seems very uncomfortable when Wallace asks to him discuss On the Road and jazz music (Tony apparently haing ben a fan of both). You can almost sense Perkins hoping a studio publicist would swoop in from the side to save him from having to reveal his bizarre side-life to middle America.”