“Belfast” Reactions Are Scaring Me

Award-seeking fall movies often spark bitter disputes. God knows Green Book did, and I was an ardent fan of that film all through the ’18 and early ’19 season. I didn’t “believe” that Green Book had a certain humanity and emotional poignancy that would connect with Average Joes in the Academy and the guilds — I knew it did and would.

Green Book wasn’t the deepest or most complex film in the world, but for a character-driven period flick about a pair of flawed but recognizably human fellows and the way things unfortunately were back in 1962, it rang true. And I knew people would respond to that fact. I was 90% sure that the wokester take-down efforts would come to naught because Green Book had the heart, the cards and the horses.

But now, God help us, it’s starting to appear that Kenneth Branagh‘s mawkish and treacly Belfast might be able to Green Book its way into the Best Picture category, and perhaps even into a win. As God is my witness and on the soul of my soon-to-be-born grandchild, Belfast isn’t worth the candle. I wouldn’t call it a calamity — it’s watchable and even interesting from time to time, and it delivers a certain bounce when Cieran Hinds is around — but it doesn’t have anything magical going on.

I knew after catching Belfast in Telluride that certain industry softies (i.e. the Sid Ganis brigade) would call it magnificent and heart-touching, etc. But I didn’t take them seriously. Competently made lump-in-the-throat movies, however treacly they may seem to some of us, will always win a certain portion of the crowd. 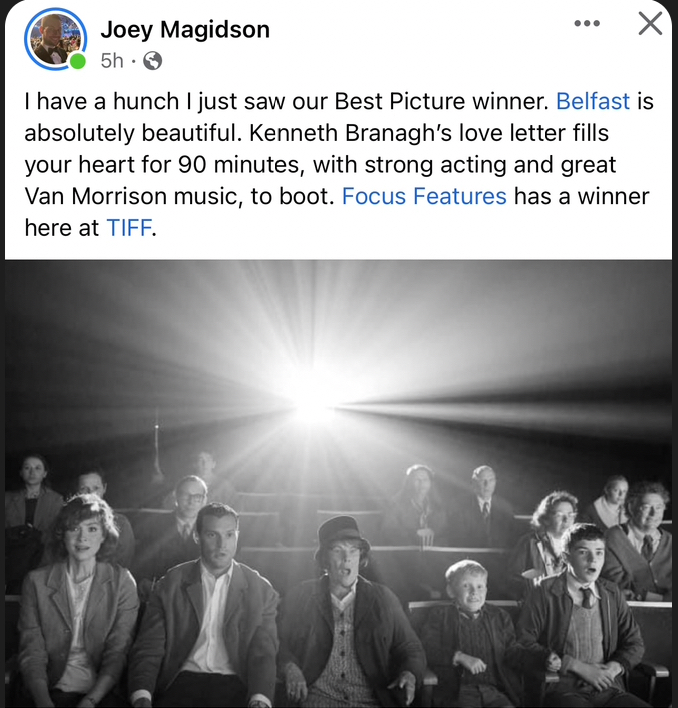 But this morning it hit me that the Belfast forces may be more numerous than I realized, and that they may be gaining strength. Awards Radar‘s Joey Magidson tweeted a few hours after seeing Belfast in Toronto that it may`go all the way and become “our” Best Picture winner, and that it’s “absolutely beautiful.” TheWrap‘s Steve Pond, a sensible and attuned pulse-taker who knows the difference between wheat and chaff, apparently attended the same TIFF screening and wrote directly after that it’s “visually stunning, emotionally wrenching and gloriously human.”

I feel drained and absolutely dumbfounded that we’re hearing such keen praise are for such a pandering and sentimental effort, a drama that partly incorporates the spirit of The Wonder Years (a thought posted by IndieWire‘s David Ehrlich) or even Leave It to Beaver (a view shared this morning by World of Reel‘s Jordan Ruimy), than to John Boorman‘s Hope and Glory or Alfonso Cuaron‘s Roma.

Pond: “Visually stunning, emotionally wrenching and gloriously human, Belfast takes one short period from Branagh’s life and finds in it a coming-of-age story, a portrait of a city fracturing in an instant and a profoundly moving lament for what’s been lost during decades of strife in his homeland of Northern Ireland. Plus it’s funny as hell — because if anybody knows how to laugh in the face of tragedy, it’s the Irish.”

Not only is Belfast not funny as hell — it tries for a tone of heartfelt amusement, but I didn’t so much as crack a smile.

Ruimy: “Belfast is rendered in rather ineffective and obvious ways — the first crush, going to the cinema, an absent father, Catholic school. Young Jude Hill, as a Branagh stand-in named Buddy, brings an insufferable amount of wide-eyed twee. [And] the whole thing sorely lacks a point-of-view, and so we never really get to know the boy well enough to become emotionally invested in the story. The end result is a mix of scattershot moments that want to feel personal and lovable, but end up isolating us. Too on-the-nose and lacking grit, Belfast plays like an odd mix of Roma and Jojo Rabbit.” 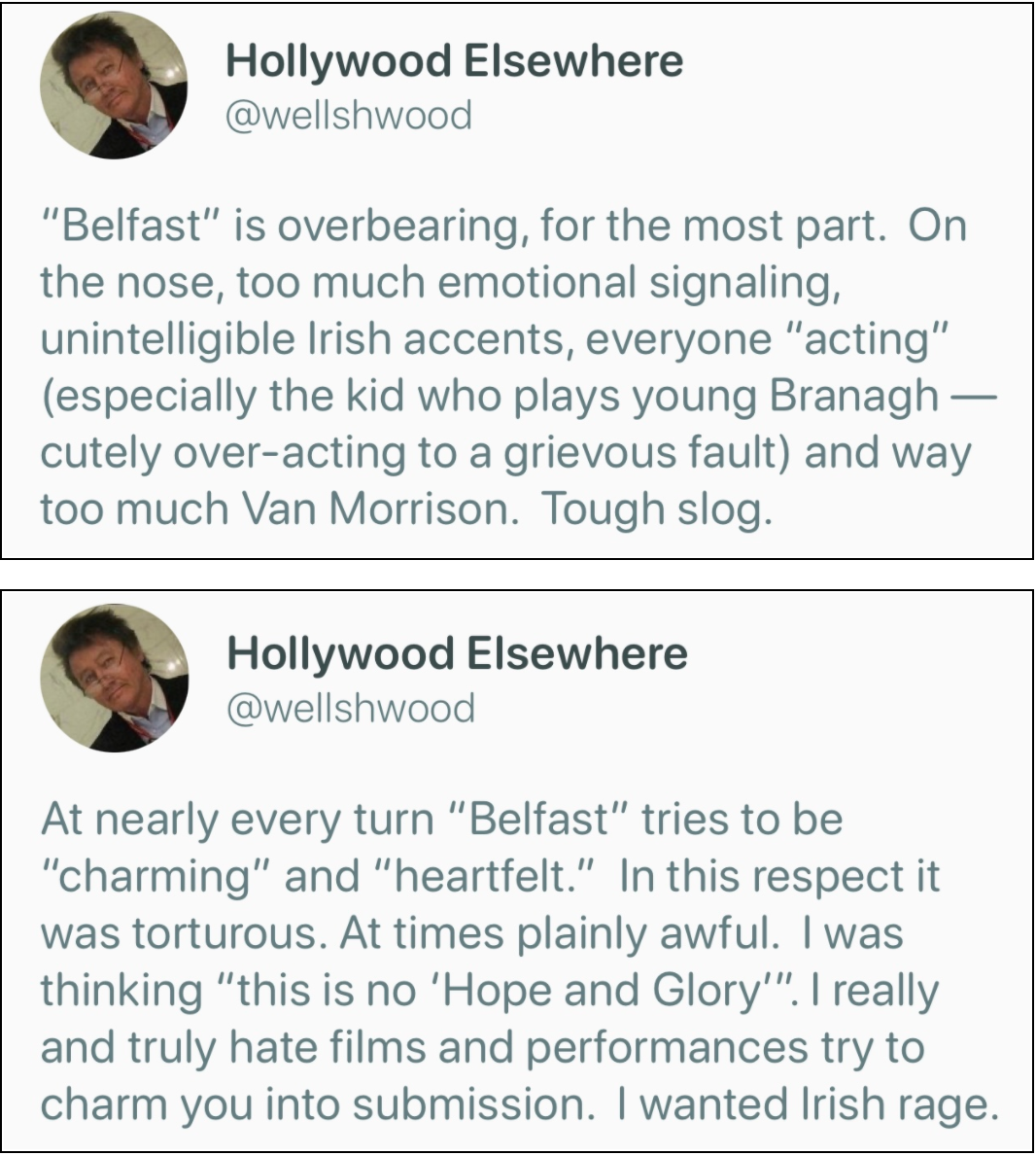 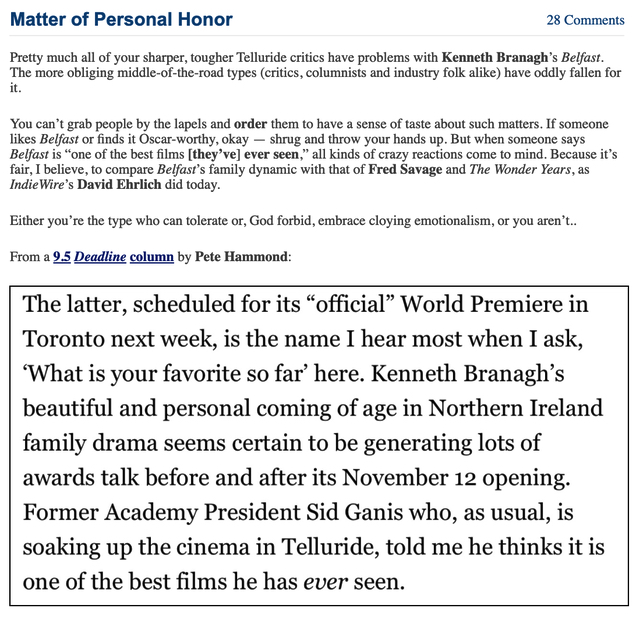 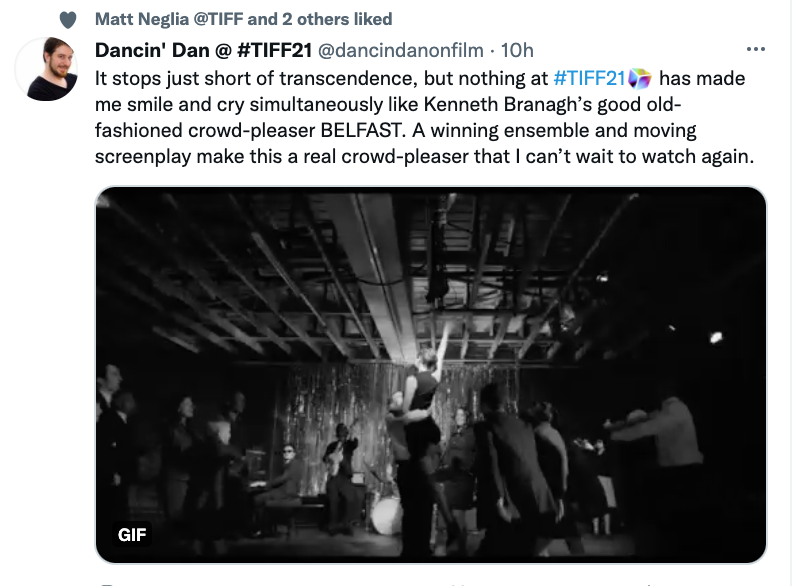