The X-Files: I Want to Believe (2oth Century Fox, 7.25) is, I feel, a fairly bad title. I would prefer a title like, say, Believer: X-Files 2. A title should always convey something you understand without having to think it through. What does I Want to Believe mean? In the existence of aliens? What does wanting have to do with it? Either the obtainable facts support their existence or they don’t. 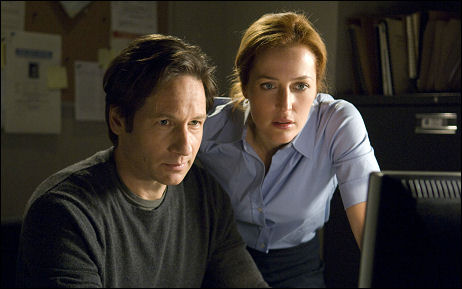 Just as I was sorting all this out, a non-journalist in the loop sent me an e-mail calling it “this year’s Star Trek: Nemesis.” Jeez, I can’t even remember if I’ve seen that film. Released six years ago, directed by Stuart Baird. “No real scope or excitement…feels like an series episode projected onto a big screen,” he then said. Well, naturally one might think that, given the TV origins and Chris Carter directing. But what’s “scope” these days and what’s “tube fare”? I’m not sure the definitions have remained static.
Anything positive to say? Yes, the guy said — the DVD release “is where the real revenue lies.” Two more plus factors: “It didn’t cost much and the stars — David Duchovny, Gillian Anderson — weren’t as expensive this time out.”