Bend Me, Shape Me

At this morning’s The Skin That I Live In press conference, Pedro Almodovar explained that his creepy comic melodrama is a result of his being “in a thriller mode.” He’s also called it “a horror story without screams or frights.” Well, okay, but I wouldn’t go to this film expecting to be thrilled or scared. It’s more of a wicked-camp thing. More than a few times the crowd I saw it with erupted in giddy chuckles. And yet Skin, after a fashion, is played more-or-less straight. Always the best way to go with a wink-winker. 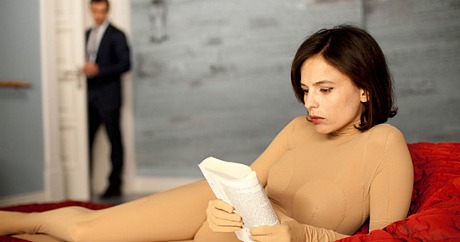 Elena Anaya, Antonio Banderas in The Skin I LIve In.

So…whatever, see it at a midnight screening with a hip gay crowd and prepare for doses of exceedingly dry humor and strange-itude in the general vein of David Cronenberg‘s Dead Ringers and Georges Franju‘s Eyes Without A Face. In a just-up tweet MSN’s James Rocchi has invoked Vertigo…yeah, that works.

For this is a highly perverse and, typical for Pedro, lusciously sensuous film about a mad plastic surgeon (Antonio Banderas) who goes to great lengths to…how to put this? A one-line synopsis I’ve found says it’s about a surgeon “who tries to save the life of his wife by creating a new skin.” Nope, wrong. It’s about Banderas, playing a brilliant Dr. Frankenstein-like sociopath with wealth and elegance to burn, recreating his dead wife and daughter with…well, let’s not say.

But the story is also about rape-payback and revenge and a selfish young hound getting a taste of his own medicine and having the tables turned. That’s vague enough, I think.

Let’s take a wild guess and suppose that straight, hamburger-eating, ESPN-watching guys are not going to beat down the doors to see this. But I like burgers and I had a enjoyable, better-than-okay time with it. It’s a first-class effort, beautifully shot by Jose Luis Alcaine (Volver, Bad Education) and assured and technically spot-on, etc. I’m a devout Pedro guy from way back, but I prefer his more soulful, deep-well stuff. 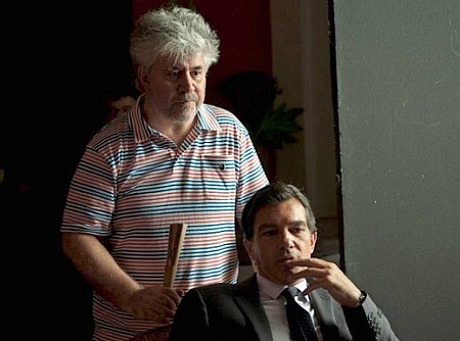 Thierry Jonquet). He also said he “considered” shooting it as a silent black-and-white film. That probably would have been too on-the-nose.

I had a slight issue about to what degree a person of a certain gender could become as thoroughly transformed as shown in the film, but it’s not worth picking at.

As Robert Ledgard, Banderas has delivered his most striking star-turn performance since “Che” in Evita (which I loved him in) and before that Philadelphia. In the second-lead originally intended for Penelope Cruz, Elena Anaya (Habla con Ella, Sex and Lucia) is fierce and focused as Vera, Banderas’s reconstructed guinea pig and object of desire. Costars Marisa Paredes and Jan Cornet also burn through.