Updated: As predicted last night during the ceremony, The Hurt Locker won the best feature as well as best ensemble award at the Gotham Independent Film Awards, held at Manhattan’s Cipriani Wall Street. And director Kathryn Bigelow was given a career tribute. As if the Summit release needed a further boost for a Best Picture nomination. It’s locked, certified…next? 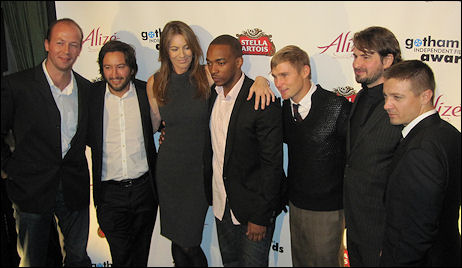 If those ladies I spoke to at the Regency hotel last week or those waitresses at Extra Virgin are reading this, I have a question: have you guys heard of The Hurt Locker now?

The Gothams’ breakthrough actor award went to The Maid‘s Catalina Saavedra, beaing out The Hurt Locker‘s Renner. Robert Kenner‘s Food, Inc., a Magnolia release, won the best documentary prize. Big Fan director-screenwriter Robert Siegel won the breakthrough director award. And Ry Russo-Young‘s You Won’t Miss Me was handed the Best Film Not Playing at a Theater Near You trophy.

In addition to Bieglow, career tribute honors were presented to actors Natalie Portman and Stanley Tucci and producers Tim Bevan and Eric Fellner.

The emcee was Kumail Nanjiani, a very funny guy whose name no one in the U.S. will ever be able to pronounce, much less spell or remember. He needs to change his name to Donnie Darker or Ken H. Doll (an allusion to CREEP finance guy and Watergate co-conspirator Kenneth H. Dahlberg) or whatever. Or…you know, Homie Kume. I could remember that.

Posted Last Night: Kathryn Bigelow‘s The Hurt Locker has just won the Best Ensemble trophy at the Gotham Film Awards, which is now about halfway through the program at Cipriani Wall Street. This means The Hurt Locker will also win the Best Feature award. Trust me — I know how this stuff works.