Every other year Grantland‘s Bill Simmons, whose metier will always be sports-writing, bangs out a piece about movies. Almost (I say “almost”) every time he does this he slams a ground-rule double or a triple — he always tags it pretty hard. I love Simmons’ voice. He’s Grantland‘s all-guy antidote to the studiously passionate know-it-allism of Mark Harris. His latest effort, posted today (i.e., 3.27), is called “The Action Hero Championship Belt,” a chapter-by-chapter review of the peak moments of greatest action stars of the last 45 years (starting with Steve McQueen in 1968’s Bullitt), is a major kick and possibly the best Simmons movie piece ever written. But since he’s only tapped out…what, seven or eight movie articles in his entire life this praise is obviously modified if not faint. 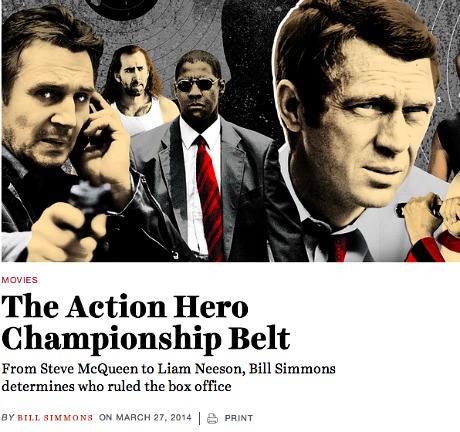 Simmons, of course, is a grade-A, brand-name columnist and cultural seer, but my first reaction was that this sort of regular-guy-dealing-straight-cards and dispensing-with-any-semblance-of-pretentious-bullshit style of movie-writing is owned these days, in my mind at least, by LexG. Simmons is a veteran pro, of course — more skilled and seasoned than Lex and in no apparent way saddled or distracted by alcoholism or hookers — but he’s such a dilletante-ish dabbler that this particular voice is primarily owned by that tortured and lamenting voice of Agonized Horndog, Underpaid Caption-Inserter and Chinese Wizard Imprisonment. I’m serious.

Quibble #1: Simmons fails to note the most odious and appalling development in action films over the last 15 to 20 years, which is the gradual shirking of any sense of physical, physics-respecting reality in action sequences due to (a) video-game mentality of screenwriters and directors who grew up in the late ’70s, ’80s and ’90s, (b) all of those leaping-off-tall buildings moments, due partly to the influence of Tim Burton‘s Batman (’89) and partly to Ang Lee‘s Crouching Tiger, Hidden Dragon, and (c) the horrendous influence of Asian-gangster martial-films beginning in the early ’90s. Quibble #2: Simmons is way too admiring of Nonstop and Liam Neeson‘s greasy-haired, too-often-flustered performance in it. Quibble #3: Simmons dismisses Vin Diesel‘s Find Me Guilty with a quick backhand, but that Sidney Lumet film is (a) incontestably first-rate and (b) obviously contains Diesel’s career-best performance. Quibble #4: Chuck Norris, a rightwing moron who isn’t that tall, is an ideological figurehead whose action films of the ’80s were uniformly mediocre. (The only one I can half-tolerate is Invasion U.S.A.) Nobody of any film-appreciating consequence has ever given a shit about anything Norris was involved in, ever. He is strictly detritus.

Standout: Simmons drops an idea that I’ve never considered but is obviously gold: Liam Neeson going after the 21st Century scumbags in a remake of Michael Winner‘s Death Wish. Update/twist: Fix it so that he makes life hell for a few HE offenders — i.e., Hispanic Party Elephant types in the upstairs apartment, Latinos who talk too loudly in cafes, wine-sipping 20something women who laugh uproariously in bars, etc.