Here’s a nice story from about how Pasquale and Louise Buzzelli & friends celebrated the death of Osama bin Laden last Monday. In an up-with-life, community-hug sort of way, I mean. 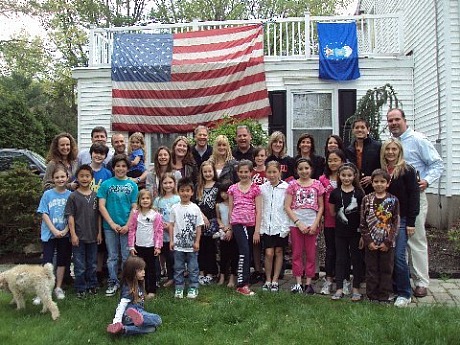 Pasquale and Louise Buzzelli are standing at far right.

It’s significant to me because (a) Buzzelli was the Port Authority guy who was in a stairwell on the 22nd floor of the WTC North Tower on 9.11.01 when it came crashing down and who somehow survived, awaking a couple of hours later on a concrete slab with only bruises and scrapes and a broken foot, and (b) because I’ve had dinner with Pasquale and Louise on the Upper West Side and know in my heart that they’re good people.

Buzzelli’s survival story is surreal and almost mystical It’s almost impossible to believe (to this day my son Jett refuses to buy it) but it happened. In fact Pasquale is almost the mythical “WTC 9/11 surfer.”