In an award-season handicapper piece on Joker, THR‘s Scott Feinberg (a) skillfully avoids mentioning the term “incels“, (b) basically says that uncomfortable echoes of recent mass shootings by loner nutjobs may be a subliminal factor as far as Academy voters are concerned (and that Joker might therefore be fucked in the awards race), and (c) agrees that Joaquin Pheonix‘s chances of being Best Actor nominated are strong, but at the same time offers a backhanded assessment of his chances of winning.

Feinberg: “The one thing about which everyone seems to agree, though, is that Phoenix, as usual, does his job remarkably well. He is frighteningly believable as Fleck/Joker, not least because, frankly, he has always come across as a little disturbed himself — see not only the 2010 ‘documentary’ I’m Still Here, but even his speech at Monday’s TIFF Tribute Gala, where he was honored.

“[Phoenix] totally committed to the part, dropping an astounding 52 pounds, which certainly makes him look like something is seriously wrong with him. And, most effectively, he plays the character, who has a Tourette’s-like disorder that causes him to laugh at odd times, as someone who is trying his best to be better, but just can’t get out of his own way.”

Translation: Feinberg believes that as the award season grinds on, Phoenix won’t be able to get out of his own way either. 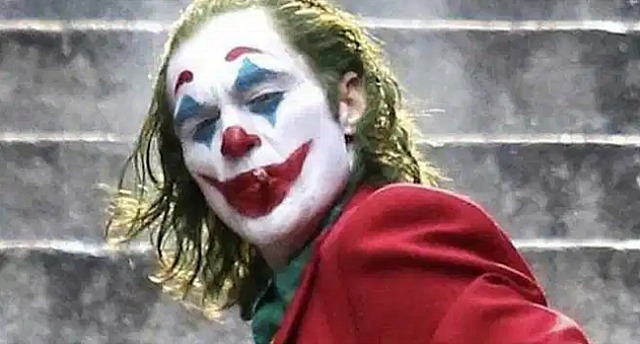 “Deranged nutcases play quite well with the Academy,” Feinberg goes on, “usually in the supporting race, but not infrequently in the lead race as well. The film to which Joker has been most likened is Martin Scorsese‘s Taxi Driver — there is even an homage to that 1976 film in Joker involving a finger pointed at a head like a gun — and Robert De Niro received a best actor Oscar nom for that, losing to another actor who played a crazy guy not unlike Joker (who gets violent on live TV), Network‘s Peter Finch.

HE exception: Peter Finch‘s Howard Beale, Jack Nicholson‘s Charley Partanna and Billy Bob Thornton‘s Karl Childers are not “wackos”. They’re simply men on their own odd wavelength, walking their own path, living in their own realm.

Beale behaved like a raving eccentric, true, but he was guided by cosmic perceptions and imbued with a magnificent mystical current and a “great unseen living force”, or what the Hindus call “prana.”

Beale explains early on that he’s not experiencing a psychotic episode “but a cleansing moment of clarity. I’m imbued with some special spirit….a shocking eruption of great electrical energy…I feel vivid, flashing…like I’ve suddenly been plugged into some great electro-magnetic field. But it’s not a breakdown. I’ve never felt more orderly in my life.”

Partanna is a sociopath who works as a crime-family assassin, granted, but if you can get past that he’s a fairly average fellow with “normal” interests and concerns. In the final act he actually reveals himself as a fairly timid and obedient type.

By the end of Sling Blade Childers has shown he’s unable to live by the usual social conventions (as it “thou shalt not murder Dwight Yoakam‘s abusive alcoholic by chopping his head open with a sling blade”) but he’s fundamentally quiet and gentle and compassionate. Feinberg excepted, Karl is no one’s idea of a “wacko”. The reason Sling Blade was a hit is that audiences recognized Karl as a mentally impaired but basically good guy.