The decent, obliging thing to do if you’ve seen Robert Siegel‘s Big Fan is to give it a pass. If you care about independent cinema and you’d like to see at least a trickle of blunt, feisty, low-budget character dramas turning up at Sundance and Toronto and Cannes for years to come, you’ll put away the things that bothered or half-bothered you and just say, “Okay, very cool! Love that pudgy Patton Oswalt angst and the whole lower-depths, lower-middle-class Staten Island loser thing…love the grayness, the bleakness and the spirit-deflating self-loathing…love the shitty story…love the whole package.” 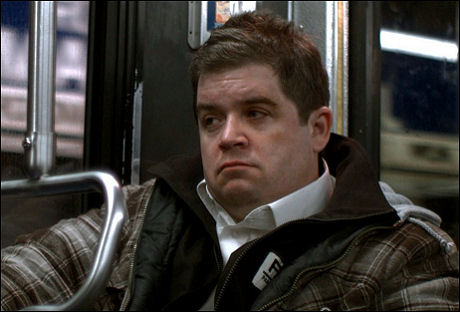 But I can’t do that, man. Because Big Fan wound up frustrating me all to hell.

I love movies that have gotten hold of something genuine and uncomfortably realistic, as Siegel has done here with the life of a sad, pissed-off fat guy named Paul (Oswalt) who works in a parking garage and lives with his braying mom in Staten Island and who lives for New York Giants games (which he can’t afford to attend so he watches the games in the Meadowlands parking lot outside the stadium with a friend, Sal, played by Kevin Corrigan), and who especially lives for his radio time on a sports talk show in which he goes into a vigorous rap about how great the Giants are and how lowly and contemptible the competition is.

Paul and Sal are these wonderfully tasty hopeless-loser characters, and the film is all about this great downbeat, going-nowhere milieu that makes the not-far-away world of the Sopranos seem like the land of Gene Kelly and Brigadoon. Big Fan is basically a very believable thing in just about any respect you’d care to name except — I’m sorry, have I mentioned this? — the story starting in the second act. That’s when it goes off the rails.

It happens after Paul and Sal happen to spot Giants player Quantrell Bishop (Jonathan Hamm) coming out of some low-rent house in Staten Island where he was probably scoring drugs. They tail Bishop to Manhattan and then to a Scores-like club, and follow him inside. They eventually go over to his table to say hi and, like the clueless assholes they are, mention the Staten Island sighting. Which of course makes Bishop angry and defensive, which leads to his flying off the handle and pounding Paul and putting him in the hospital.

So far, so good. And the next turn — Paul so invested in Giants worship that he refuses to press charges against Bishop or sue him for damages, even though he has a solid case and could probably collect big-time, especially with Paul’s ambulance-chasing attorney brother offering to handle the case — is interesting also. But the failure of Bishop to get in touch after Paul lets him off the hook, or for anything of a vaguely positive nature to happen due to Paul’s refusal to hurt the Giants in any way, is immensely disappointing. I simply didn’t believe that Bishop wouldn’t do or say something, and I knew as the story froze and gave up the ghost that Siegel had just…I don’t know what he was doing but I knew he wasn’t doing it.

The story just runs out of gas at this point because there’s really nothing at stake and nowhere to go. It comes to an end with a bizarre incident in a Philadephia bar that felt to me like just another reiteration of loser-dom.

N.Y. Times critic Manohla Dargis has written that the point of Big Fan is that a life filled with so much generous love needs no pity. Oh, yeah? The vibe in the beginning is one of half-articulate nihilism and self-loathing plus stupdi footbal love. The second act vibe is about the same thing. The third and closing act is about half-articulate nihilsm and self-loathing mixed with depression and fanatical stubbornness. What is anyone supposed to do with this? What is the appropriate response if you’re not a film critic? Drive out to the middle of the Verrezano-Narrows bridge and jump off?