The late Dan Cracchiolo, the hot shot get-around who worked as Joel Silver‘s top guy in the mid to late ’90s and a little beyond, once told me about a conversation he and Silver had about the size of the craniums of big movie stars. He said that Silver told him, “Dan, all big stars have really big heads.” Physically, he meant. 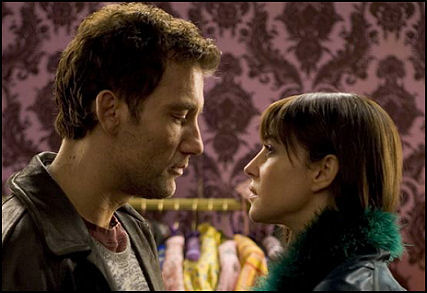 I’ve spoken to a fair number of big-name actors and can testify that this is frequently the case. Mel Gibson has a big head; ditto Kirk Douglas and Kevin Costner. (I once wrote that Costner “has a head the size of a bison’s.”) Warren Beatty has a fairly sizable head. So does Phillip Seymour Hoffman. I don’t recall Tom Cruise‘s head being all large, however.

I would say that Clive Owen, to judge by the above photo from Shoot ‘Em Up, certainly qualifies.

There’s obviously something about having a big head that gives a person presence, power…a sense of dominance. Full disclosure: I have a big head myself.

Big movie-star heads are a very consistent visual factor in day-to-day Hollywood life, and yet people who don’t mix it up with talent would never, ever learn of this from mainstream interviewers and columnists. I’m just saying…