For whatever reason, the Hollywood Reporter‘s Borys Kit decided not to mention in a 7.17 story that Mark Boal, the screenwriter of a semi- fictional Iraq War drama called The Hurt Locker, is the writer of the 2004 Playboy magazine article that Paul Haggis ‘s In The Valley of Elah (Warner Independent) is based upon. 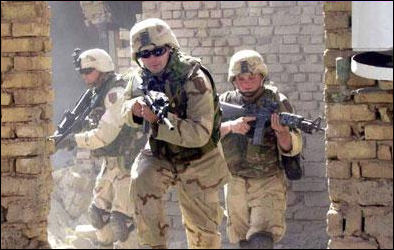 They’re both Iraq movies (Elah less so in terms of in-country footage), but Boal has obviously begun to carve himself a rep as Hollywood’s go-to guy for moralistic Iraq material.
Kathryn Bigelow will begin directing Locker next week in Jordan and Kuwait, presumably for a price. Jeremy Renner, Anthony Mackie and Brian Geraghty are starring. Ralph Fiennes and Guy Pearce have cameo-sized roles. The story’s about “an elite Army Explosive Ordinance Disposal team in present-day Baghdad that fights an onslaught of bombs and snipers.”