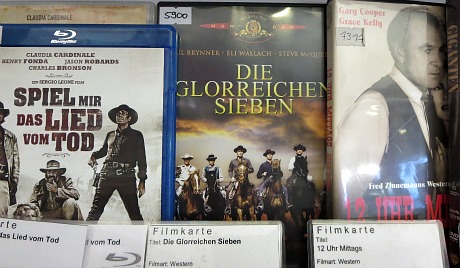 A clean-cut, well-built fellow with a cappucino complexion, the clerk otherwise seemed bright, sharp and conscientious…but he had no clue who the director of Stalag 17 or Some Like It Hot or Avanti! or Sunset Boulevard is, was or might be.

His initial response when we asked for the film was “Billy Wilder?” I thought he was saying “wait…are you sure Billy Wilder directed it?” But then he said it again: “Billy Wilder?” Clearly perplexed. Then he said it a third time: “Billy Wilder?” Okay, we get it, Professor Marvel. You’re a movie guy from Berlin, and you’ve never even heard of an esteemed German-born director from Berlin who emigrated to the U.S. and gradually became one of the greatest and most distinctive directors of the 20th Century. No worries.

I’m not suggesting that this video clerk be brought up on charges. I’m just saying that if a 35 year-old video-store clerk has never heard of Wilder then the 20somethings and 30somethings who ostensibly love film have probably never heard of Mr. Wilder either. His reputation is not carrying over to the young ‘uns. And this is with a hot-pink-toned Billy Wilder theatre operaing in Westwood and Double Indemnity recently out on Bluray and so on. I show you the times. The world is changing.

Oh, and by the way? They guy rummaged around and all he could find was a shitty pan-and-scan VHS of One, Two, Three.