Bit of a Shame

I’m not challenging Summit Entertainment’s decision to wait until sometime in ’09 to release Kathryn Bigelow‘s The Hurt Locker, which, even with its modest shortcomings, is unquestionably one of the best crafted, big-jolt action thrillers of the year. Well, actually I am. Why not open it on a modest platform basis in December and then put it out in late January or February, say? 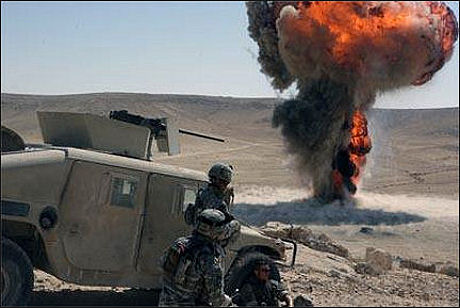 I understand Summit’s concerns. The fall and year-end periods are locked up tight in terms of theatres and heavy-duty competition. It’s a scary time for indie-sized distributors right now, and it’s a murderously expensive proposition to open a film over the next three and a half months. Plus there’s no guarantee that the ostriches who’ve refused to see other Iraq-themed films won’t do the same here. (I still believe that all the people who voted for Bush in ’04 should be forced to watch each and every Iraq War film, in the same way Alex was forced to watch violent films in Clockwork Orange with those eyelid-clamp devices and eyedrops.)
Summit’s decision feels disappointing for three reasons. One, The Hurt Locker is not just an Iraq War movie — it’s a first-rate thriller that works (at least partially) as a kind of revisiting of James Cameron‘s Aliens. Second, all strong movies based upon real-life experience and set in a fluid, ongoing situation like the Iraq War obviously lose potency and timeliness when they sit on a shelf. (Bigelow’s film began shooting, remember, in Jordan right after Brian DePalma finished filming Redacted, and that film played at last year’s Venice and Toronto festivals and opened ten months ago.) And third, it just feels wrong for a film as good as this to be kept out of the year-end derby, although I wouldn’t necessarily call it Best Picture material. (Thrillers never make it on this level.) It’s certainly good enough to potentially end up on Ten-Best critics lists, and it’s at least plausible that Jeremy Renner could drum up some Best Actor heat.
“Set in Baghdad and the full maelstrom of that godforsaken conflict,” I recently wrote, “this is a full-power, nail-biting, bomb-defusal suspense film that gradually becomes a kind of existential nerve ride about the risk and uncertainty of everything and anything, plus an explanation of the addiction that war is for some guys who go through it and can’t quite leave it alone.
“The Hurt Locker is absolutely a classic war film in the tradition of Platoon, The Thin Red Line, Pork Chop Hill, Paths of Glory and the last 25% of Full Metal Jacket, and it damn well better be acquired by someone and set for release sometime between now and 12.31. Because I’m getting tired of this shit.”