The Studio Canal/Lionsgate Bluray of Alexander McKendrick‘s The Ladykillers is a strawberries-and-whipped-cream nightmare — perhaps the most visually unappealing manipulation of a classic film ever issued. It’s saturated with the brightest and bleachiest white light seen anywhere since the aliens stepped out of the mother ship at the end of Close Encounters. It’s like someone turned down the color key and then poured milk and cherry sauce over the master negative. The effect is one of rosey anemia — a sickly dilution like nothing I’ve ever seen from a 1950s color film. 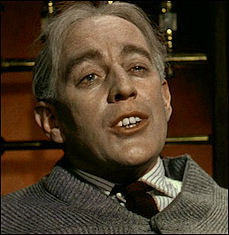 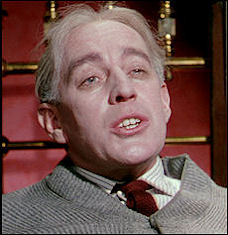 I bought this Blu-ray for $35-something last night at Kim’s, and I’m infuriated. I tried to see into the virtue of the white-pink color scheme or whatever, but I can’t watch the damn thing without getting angry. And I’m especially pissed at the reviewers who gave this disc a pass without mentioning the bleachy saturation effect.

N.Y. Times DVD columnist Dave Kehr called The Ladykillers Blu-ray a “revelation” — a revelation of strawberry-shortcake suffocation, he meant! He noted that “no earlier home video edition has done justice to [this film’s] rich, bold use of Technicolor, that distinctively sharp-edged, cool-toned Technicolor that came out of the British labs.” Did Kehr actually say “rich? And there’s no way “bold” is an appropriate adjective unless Kehr is referring to the boldness of Studio Canal technicians saying “eff you!” to the average Blu-ray consumer.

DVD Beaver‘s Gary W. Tooze noted a possible “chromatic aberration”(which a reader pointed out) but said he’s “very happy with the final product [which I] strongly endorse. This is a fabulous film and a strong Blu-ray package.” Why would he say this? This is a Blu-ray disc that literally pisses on any person dumb enough to have bought it.

The only half-honest assessment came from DVD Talk’s Stuart Galbraith IV. He noted that 1955 Ealing Studios comedy “is saturated with rich hues,” but then explained that the Anchor Bay Ladykillers DVD “was a bit dark” while the Studio Canal Bluray “is too light, at least some of the time.” Correction — the white-out effect is evident throughout the entire film.