Since winning his Best Actor Oscar for The Pianist (’03), Adrien Brody has appeared in one underwhelming so-so after another — The Village, The Jacket, King Kong, Hollywoodland, The Darjeeling Limited. I don’t mean to be snide or churlish, but I’ve lately come to imagine that there’s something called the Adrien Brody curse, or an equation between the poor guy being in a film and that film being a problem. Brody is a fine actor; his performances are always rich. But he has this thing about appearing in films that are either gloomy indies or commercial head-scratchers. 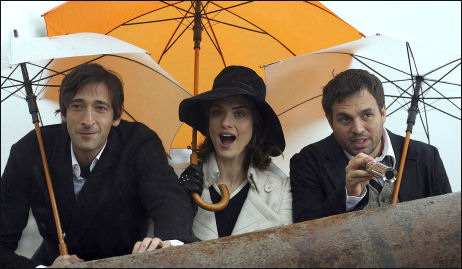 I’d like to believe that his latest pic, The Brothers Bloom, will break the pattern, although I’m a little concerned by the light caperish tone of the ads and the trailer. Here’s what gave me particular pause — an 8.24 New York magazine profile by Logan Hill of Bloom costar Rachel Weisz.
“In the globe-trotting con-artist movie The Brothers Bloom, two lifelong grifters (Adrien Brody and Mark Ruffalo) devise double-crosses so fabulously complex that they begin to lose track of where real life ends and the bamboozle begins,” Hill begins. “To them, everything — identity, love, friendship, death — is a lie.
“Even the film’s title is a classic bit of misdirection, because the movie isn’t really about the guys, after all. It’s about the marvelous mark they pursue: Penelope, a basket-case New Jersey millionairess with a thousand talents and just as many fabulous outfits. And the saucer-eyed, seemingly guileless actor playing Penelope — Rachel Weisz, as you have definitely never seen her — steals the film right out from under the brothers’ noses.”
See what I mean? Sounds frothy, negligible.