Blown Off by Chastain’s Publicist 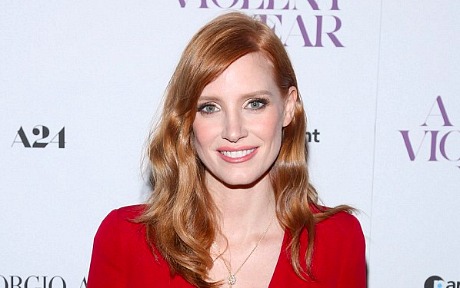 I would then mention that while I admired Bradford Young‘s cinematography when I saw A Most Violent Year at the Dolby during AFI Fest and then the next night at the WME screening room, it doesn’t look so hot on the DVD screener that went out. It actually looks like it’s covered in pea soup. Young’s cinematography has to be perfectly lighted or it doesn’t work, apparently. His work on Selma, I feel, looks even murkier. I’ve now decided that Young is not one of my favorite directors of photography. Actually I might not have brought this up.

Chastain is 37, and she only really broke through three years ago with her performances in Take Shelter and The Tree of Life. Most lead-level actresses break through in their early to mid 20s, and now and then in their late 20s. I think it’s relatively rare for actresses to punch through in their early 30s, and it’s next to unheard of them to break into the big-time in their mid 30s. Born in March 1977, Chastain was 34 when it all began to happen.

I might have mentioned her blazing performance as Maya in Zero Dark Thirty and the horrific takedown that film suffered over the torture issue. I might have mentioned the much-reported contractual stipulation with the Interstellar producers that she can’t promote her performance in A Most Violent Year outside of certain perimeters, at least within an award-relate context. Nobody, of course, has been talking about her performance in Chris Nolan‘s film , which has been all but dismissed in an awards context, and everyone’s talking about her work in A Most Violent Year.

I would have asked if she’s met The Babadook director Jennifer Kent, and suggested that it would be a great idea if she and Kent, both sharp, go-getter redheads, could pool forces one day.

Could I have covered all that in 15 minutes?