I saw Wong Kar Wai‘s My Blueberry Nights (Weinstein Co., 4.4) eleven and a half months ago at the Cannes Film Festival. It’s finally opening this Friday at limited venues. The best thing about it, honestly, is the title — the allusions to eroticism and delectability within. I was going to say I can imagine hip urban thirtysomething couples being okay with some of it, but I honestly can’t do that. Here’s are portions of what I wrote from the Orange Cafe so many months ago: 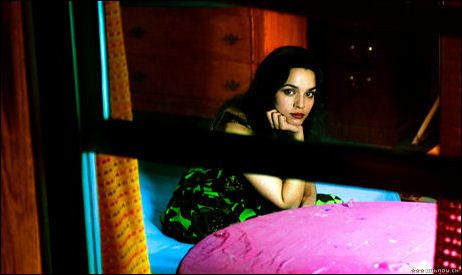 (a) “I could sense trouble fairly early on in Wong Kar Wai‘s My Blueberry Nights, a horribly written, woefully banal self- discovery mood piece (the word ‘drama’ really can’t be applied) about a young girl (Nora Jones) who leaves her home town of Manhattan and starts job-hopping across the country — waitress gigs in Memphis and I-couldn’t-tell- what-town in Nevada, with an apparently uneventful stopover in Los Angeles — in order to get over a bad case of breakup grief.”
(b) “That early ‘uh-oh’ comes when Jones, playing a lady named Elizabeth with a certain doleful sincerity, is on the phone with her soon-to-be-ex. She asks him, ‘Are you seeing somebody else?’ and then two seconds later she inquires, ‘Who is she?’ In other words, the boyfriend (whose voice we don’t hear) has quickly admitted to infidelity. Of course, guys never admit there’s another woman without being hammered and prosecuted by their betrayed significant other for hours, if not days or weeks, on end. The male genetic code prohibits it. We all know this. So right away it’s obvious that the human behavior and particularly the human dialogue will not have the cast of reality.”
(c) “The Blueberry strategy, in any event, is roughly this: the folks whom Elizabeth gets to know and feel for during her episodic journey — a Manhattan pasty-shop owner from Manchester (Jude Law), an alcoholic, deeply depressed beat cop (David Strathairn), the cop’s hysterically alienated wife (Rachel Weisz), a hard- luck Nevada gambler (Natalie Portman) — are all nursing broken hearts, and their combined pathos somehow will prod Elizabeth into relinquishing the mope-a-dope and deciding to look forward and live in the now.”
(d) “The ‘aha!’ she finally absorbs seems to have something to do with realizing how much worse off everyone else is than she, along with the futility of letting hurt be the dominant chord. The problem is that there’s no giving a damn about any of it, particularly since Elizabeth’s new attitude leads her back to a possible relationship with the flirtatious Law, with whom she spends the first third of the film with, trading sad memories and little bon mots of bittersweet regret about bruised feelings and whatnot.
(e) “There’s just no investing in Law these days — every character he plays feels like a sly, gently calculating hound — and it’s impossible not to feel cynical about any female character in any movie hooking up with this smoothie because you know where it’ll all eventually end up.”