In two posts over the last six days the Digital Bits guys have listed several titles (some new, some classic) being prepared for 2010 Bluray release: Fox’s Alien Anthology, Collateral, the Indiana Jones trilogy (please…not Crystal Skull!), The Maltese Falcon, a Dr. Zhivago 40th Anniversary Ultimate Collector’s Edition, Spielberg’s War of the Worlds and Saving Private Ryan, a bunch of Clint Eastwood movies (Where Eagles Dare, etc.) and three titles that aren’t necessarily 2010-ers but may be released the following year or in 2012: Ben-Hur, The African Queen, Lawrence of Arabia. 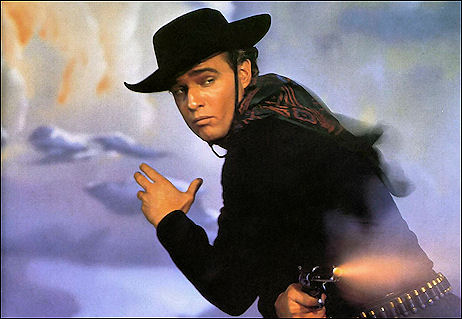 My personal requests focus on (a) large-format films of the ’50s and ’60s, (b) Technicolor films known for their lush and intense palette, and (c) especially crisp and handsome black-and-white classics. I could go on and on but a Paramount Home Video Bluray of To Catch A Thief, shot in VistaVision, would be dellightful; ditto The Ten Commandments (VistaVision) from the same folks. I wouldn’t mind a nice Criterion Bluray of Spartacus (70mm Technirama), for that matter.

Plus Marlon Brando‘s One-Eyed Jacks (VistaVision, obviously requiring a restoration) and Mutiny on the Bounty (Ultra Panavision 70), Oklahoma and Around the World in 80 Days (30-frame Todd-AO), Cleopatra (24-frame 70mm Todd-AO…a nearly unwatchable film and yet beautifully photographed), My Fair Lady (70mm), Funny Girl (ditto)…actually I could live if they let the Funny Girl Bluray go. I could survive, I mean. It wouldn’t kill me.

I’m especially interested in seeing a Bluray of the 1953 War of the Worlds, but with those awful Martian space-ship wires digitally erased (like WHV did with those Wizard of Oz wires). The too-vibrant colors in this film look fake, of course, but exquisitely so. ’50s movies with poster-paint colors provide to film buffs what a Nancy Meyers movie delivers for women of a certain age — total bullshit fantasy that soothes and satisifies.

I’d also like to see Blurays of any and all Gregg Toland movies shot in the late ’30s and ’40s — Citizen Kane, obviously, along with Wuthering Heights, The Best Years of Our Lives, Ball of Fire and John Ford‘s The Grapes of Wrath. As well as Ford’s How Green Was My Valley, My Darling Clementine and The Quiet Man. And a Bluray of Fred Zinneman‘s From Here To Eternity, which I presume is in the works based on a restored version of this 1953 classic having recently screened at the Academy.