Bodies On The Roof

Sometime yesterday window dresser ChadMichael Morrisette, a.k.a. L.A.’s “mannequin man”, created a sobering art display on the roof of his West Hollywood home. Profiled by NBC News last night, Morrisette put 50 sprawled mannequins, representing the 50 Orlando clubbers killed Saturday night by jihadist-nihilist Omar Mateen, on view to remind observers what that horrific toll actually looks like. (The number of Pulse victims has been revised to 49 — the body of Mateen, killed by cops, was included in the original count.)

Morrisette: “We cannot have 50 Americans killed in a nightclub and continue to do nothing about it.”

We can’t, huh? When NRA-supporting yokels hugged their guns in the wake of the 2012 Newtown slaughter (20 kids, six adult staffers), I figured that was it — they have no souls, they’re immovable, they’ve gone around the bend. We can also guess what a good percentage of hinterland conservatives are probably muttering to each other privately about the Orlando tragedy. Remember — Islamic jihadists and hardcore gun-toting Christian righties are pretty much cut from the same cloth. This was the thrust of an “American Taliban” rant that Aaron Sorkin wrote for a Newsroom segment that aired in ’13.

Here’s an 11.20.14 profile of Morrisette by la-racked‘s Danielle Directo-Meston.

Note: Morrisette’s object d’art is on the roof of his home at the SW corner of Fountain Ave. and Orange Grove Ave., one block east of Fairfax. 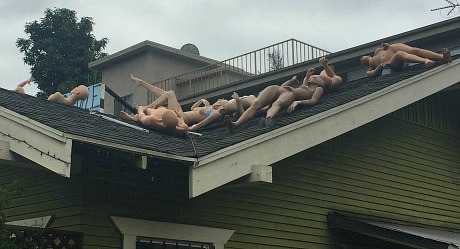 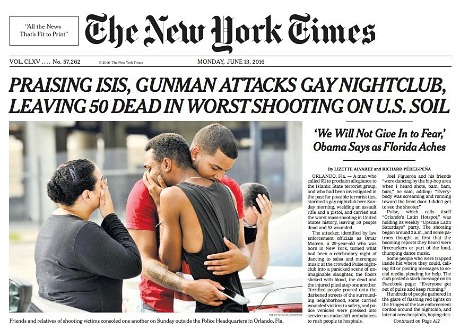