Terry Gilliam‘s The Imaginarium of Doctor Parnassus, which will open in England and Australia in early ’09, will contain the shards of Heath Ledger’s very last performance, although his character of Troy will also be played by three other actors — Johnny Depp, Colin Farrell and Jude Law. Nonetheless, and no matter how Gilliam-esque Parnassus turns out out to be, Ledger’s name on the marquee will certainly boost business. Especially given the excitement associated with his Dark Knight/Joker performance. 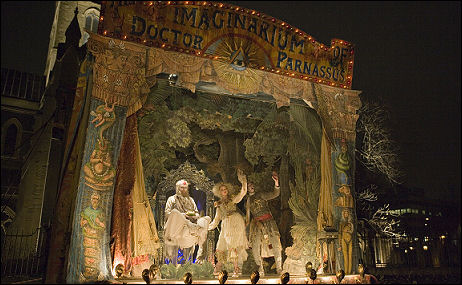 And yet Gilliam has told The Telegraph‘s Tim Walker (a.k.a. “Mandrake”) that the idea of a Ledger Oscar campaign as “nothing more than a cynical publicity stunt” by Warner Bros. Has Gilliam lost his mind? A Best Supporting Actor Oscar campaign on Ledger’s behalf would probably be the best commercial godsend that could happen to Dr. Parnassus. And Warner Bros. wouldn’t be mulling a campaign if the support wasn’t there among fans, press and industry. What could Gilliam be thinking?
Warner Bros. “will do anything to publicize their film,” Gilliam told Walker. “That’s just what they do and you can’t get upset because it’s bullshit. They’re like a great white shark which devours whatever it can.”
Gilliam directed Ledger in some outdoor London scenes for Dr. Parnassus just two or three weeks before the actor’s accidental death last January.