There’s a new story/photo album piece by USA Today‘s Suzie Woz (a.k.a., Susan Wloszczyna) about Richard Kelly‘s The Box, and the plot details she’s revealed make it sound like the basic Richard Matheson story (which is more or less “The Monkey’s Paw” with variations) has been heavily collateralized. 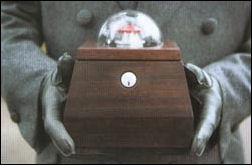 It takes place in 1976, for one thing. (Why?) James Marsden‘s character works for NASA and has co-workers who wear plaid pants. Marsden is working on the Viking mission to Mars. (Who gives a shit about NASA space missions? The Box is supposed to be a moral tale about middle-class avarice and ambition. What’s going on here?) Frank Langella‘s Arlington Steward (the guy who hands the dreaded “box” to Cameron Diaz early on) has “a command module in a wind tunnel at NASA’s Langley Research Center in Hampton, Virginia.” A command module?
In other words, imaginative conspiratorial elements involving big agencies and ’70s paranoia are being injected into the slender short-story premise. I have this feeling this is going to be Donnie Darko-ish. I can hear the sound of a jet engine crashing through the roof of a house.
The Box is based on Matheson’s 1970 short story “Button, Button.” This is also what the 1986 Twilight Zone episode was called.

February 27, 2008by Jeffrey Wells10 Comments
« Previous post
Back and forth
Next post »
Gavin O’Connor vs. Bob Shaye