Update: Zach Braff has responded to Pamela McLintock‘s 5.15 Hollywood Reporter story about his having landed a “full” financing deal for Wish I Was Here through Worldview Entertainment, which has prompted some to ask (a) why he’s holding on to his Kickstarter fund ($2.6 million) and/or (b) why Kickstarter contributors don’t just pull their support. 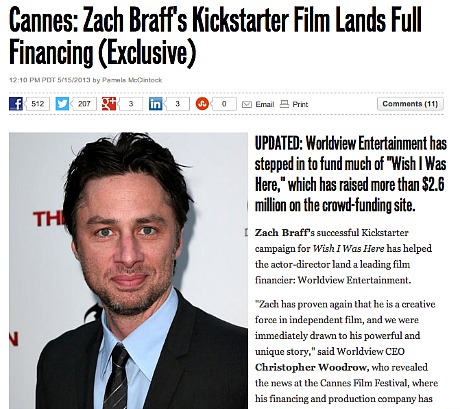 “The story out there about the movie being fully funded by some financier is wrong,” Braff writes. “I have said on here and in every interview I’ve done on this project that the film would be fully financed from three sources: (a) My Kickstarter Backers, (b) my own money and (c) Pre-Selling foreign theatrical distribution. Those three amounts will bring us to a budget of around 5 to 6 million dollars.

“Nothing about the making of this movie has changed. This movie is happening because backers funded it.

“This film would not be happening without my backers. The traditional way is to have a financier put up the money and then sell the foreign rights. What I did was to say to my fans, ‘If you and I provide the capital, we don’t need some rich dude dictating how we make the movie; we can then go sell foreign distibution and we’ll be all the way to our goal. Are you interested in that?’ So far 38,455 people have said yes.

“What happened today is that a financial company agreed to fill in the gap between what Kickstarter backers have funded and what I have put in, and what the movie will actually cost. Shooting could not happen without this.

When you pre-sell foreign distribution, you don’t get that money for some time. So you need to go to a company to provide something called “Gap Financing”. They are essentially a bank. Loaning us the ‘gap’ between what we’ve raised together and what we need to actually make the movie. I have no idea where a 10 million dollar number came from but it is wrong and a lie.

“This loan is secured against proceeds generated by selling the foreign rights to the movie. That’s been the plan all along.”

Here’s Braff’s whole post. I’m just copying and passing along. I have no dog in this.

Earlier: Now that Worldview Entertainment has pledged to fully finance Zach Braff‘s Wish I Was Here, what is Braff hanging on the $2.6 million in Kickstarter money for? He’s landed a deal, he’s out of the woods. Apparently those who donated to Braf’s project have the option to withdraw their pledged donations. is Kickstarter for filmmakers who need outside-the-beltway help in financing their projects or not? Braff is on safe ground. Why does he need Kickstarter dough at this stage?