Time and again I’ve posted a famous quote from the legendary Michael O’Donoghue: “Simply making people laugh is the lowest form of humor.” Here’s another thought in this vein: “Calling a smart, highly spirited, deftly-constructed comedy ‘not funny enough’ is like meeting a bright and soulful and beautiful woman and saying her tits aren’t big enough and that her ass needs to be rounder.” 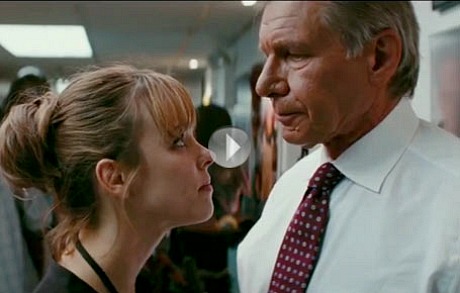 I’m sorry to use a crude analogy in an argument with the esteemed Marshall Fine, but his negative review of Roger Michell and Aline Brosh McKenna‘s Morning Glory isn’t that much different from a construction worker loudly commenting on the physical assets of a woman walking by a work site on 52nd street. He’s basically saying McKenna’s punch lines aren’t zippy or spritzy enough and that the laughs aren’t loud or frequent or horsey enough.

Well, let me tell you something: there is mirth and merriment and occasional howlers all through Morning Glory. It’s a film with chuckles, chortles, screamers, amusing banter, straight-ahead laughs, titters, rapier wit and plain likability. Not to mention story tension and believability and high-strung spirit and a touch of pathos and a considerable rooting factor in the case of Rachel McAdams‘ “Becky,” a morning-show producer.

There are other ways to skin a comedic cat than to try to maul an audience with laughter. Like fine fertilizer or seasoners or home-made salad dressing, Morning Glory‘s humor romances and enhances the whole. It fits in and fortifies. It is what it is according to its own plan, and is unmistakably present and pulsing from start to finish.

Breasts and buttocks of whatever size and shape can be very proportionately pleasing if not highly stimulating when evaluated within the particular scheme of a woman’s size and height and weight. And while their presence can and must be very important to men, their aesthetic importance tends to lessen and settle into reality the more you get to know the woman — i.e., who and what she is in terms of personality, character, loyalty and whatnot.

I’ll tell you what else is wrong with Fine’s “it’s not funny enough” complaint. If loud laughter from a given audience is your criteria, Adam Sandler‘s Just Go With It might, depending on the Jersey Shore Eloi factor in the seats, prove to be a “funnier” comedy than Morning Glory. In my book anyone who would then say “hey, go see the new Adam Sandler comedy because it’ll make you laugh more than Morning Glory“…well, that person would be the devil, plain and simple. Because a value judgment of this kind would have to be regarded as a small nail in the coffin of civilization as we once knew it.

November 9, 2010by Jeffrey Wells23 Comments
« Previous post
First Crack at Fighter
Next post »
"Look How They Massacred My Boy"