I can’t believe I’m planning to pay money out of my own wallet — the fruit of extremely hard and grueling day-to-day effort — to see Harold and Kumar Escape From Guantanamo Bay (New Line, 4.25) sometime later today. I know what I’m in for. It’s going to make me want to to kill myself Khmer Rouge-style with a blue plastic bag. But I missed the damn press screening and I need the ammunition that will derive from being able to know and say “yes, I’ve seen it.” 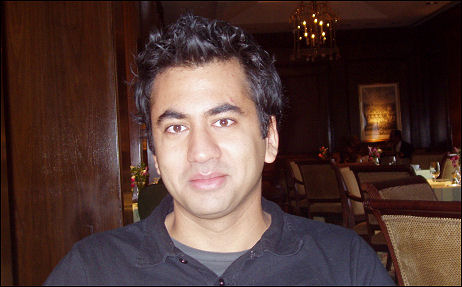 Especially knowing what I do about Kal Penn, which is that he’s an animal. I know of no other youngish actor who conveys chronic brain-cell blockage and open-mouthed slovenliness like Penn does time and again. I’m not saying he’s literally an unbridled idiot off-screen, but he’s relentless at trying to convince audiences that his characters are low-born and dumb as fenceposts, and after a while the effort carries over.
I didn’t realize Penn had the bona fide ape gene until I caught Mira Nair‘s The Namesake (’06), in which Penn played the son. I thought I might be treated to some other aspect of his personality, that working with Nair would allow him to shake off the low-rent moves and attitudes that he’s used in Harold and Kumar Go To White Castle and all the other 20-something TV shows and crap-level movies he’s been in.
But within minutes of his first appearance in The Namesake, Penn went into this standard routine, which boils down to that clueless-asshole expression plus that open-mouthed thing he does in nearly every scene. What a creep, I told myself then and there. He can’t class himself up for even a single role. Penn plays it fairly straight and restrained throughout most of The Namesake, but I didn’t believe for a second that he wasn’t a major dumbass beneath the skin.
The only time I half-believed a Penn character might actually have something going on upstairs was during his brief performance in Mike Binder‘s Man About Town.
Penn’s decision to teach two current undergrad courses at the University of Pennsylvania — “Images of Asian Americans in the Media” and “Contemporary American Teen Films” — in no way belies or undercuts what I’ve said here. He doesn’t just “play” morons convincingly — he convinces you that it goes deeper than that.
“The Asian American Studies Program is delighted that Kalpen Modi, a.k.a. Kal Penn, chose our program to host his teaching engagement at Penn,” Grace Kao, director of the Asian American Studies Program at Penn, said last year. “Mr. Modi is one of the leading Asian American actors of his generation and is particularly aware of how his racial and ethnic identification has affected his professional experiences.” And that’s supposed to mean what exactly?