I never knew any Vinnie Barbarino or Tony Manero “borough” types in the mid ’70s, but I’d known a few Italian-American guys during my painful upbringing in Westfield, New Jersey. They proudly called themselves “guineas”, wore pegged pants and pointy black leather lace-ups, radiated pugnacious vibes and seemed to live in their own angry little world.

And I knew that the bridge-and-tunnel chumps who came into Manhattan on weekends in the late ’70s, the ones who were too thick to realize that their chances of getting into Studio 54 were completely nil…those razor-cut slash polyester goons who radiated sartorial cluelessness in so many ways, and thereby indicating a certain myopic mindset…I knew these guys.

And so I believed Nik Cohn‘s “Tribal Rites of the New Saturday Night,” the 6.7.76 New York cover story that soon became the basis for Robert Stigwood and John Badham‘s Saturday Night Fever, which became a huge hit and cultural earth-shaker after opening on 12.14.77.

I loved the 2001 Odyssey dance sequences as much as the next guy, but I wasn’t a fan of the film itself, largely because I found John Travolta‘s Tony Manero an impossible asshole — chilly, closed off.

Yes, I know — that was who and what he was, being based on the “Vincent” character Cohn had written about and so on. But where was it written that I had to like Manero’s company?

I bought a ticket to see Badham’s film at Westport’s Post Cinema just before Christmas of ’77. I wanted to have an interesting and perhaps an eye-opening time, but almost immediately I was saying to myself “I have to hang out with this asshole?” On top of which FUCK DISCO…that was one of my foundational beliefs at the time.

What a shock, therefore, to discover 20 years later that Cohn had basically “piped” the New York cover story. He’d done a little research in Bay Ridge and poked around and talked to a few locals, but had more or less made it up.

And yet Cohn’s article felt genuine. I totally recognized (or felt that I recognized) his observations about a certain strata of young, under-educated Italian-American guys in their late teens and early 20s and their dead-end jobs and whatnot…it seemed to convey certain basic impressions of borough guys of that era. I bought it and so did Hollywood, Stigwood, Badham, Travolta and, down the road, tens of millions of fans of the film.

It just went to show that fiction could masquerade as honest reportage and vice versa. I re-read Cohn’s piece last night after watching the Bee Gees doc, and I had a good time with it. Even knowing about Cohn having admitted the truth in ’96, I bought it all the same. Good writing is good writing. 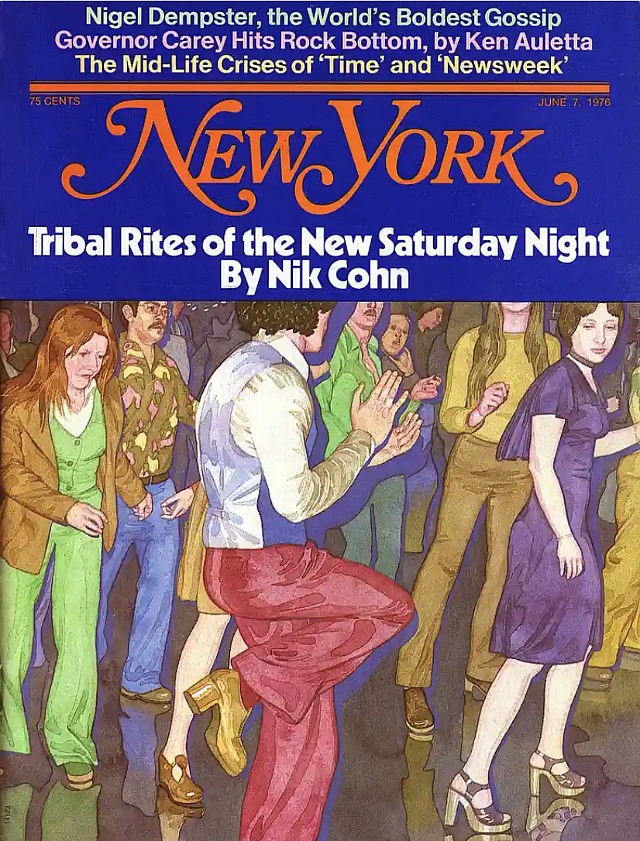 I love these three passages from the Cohn article: 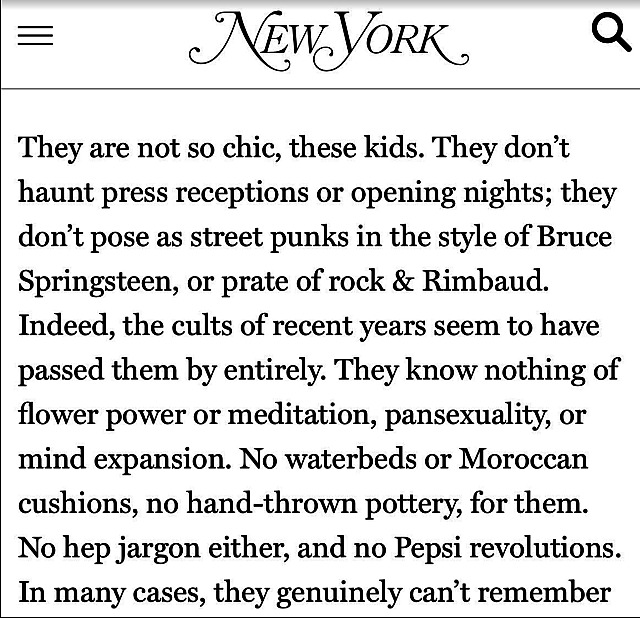 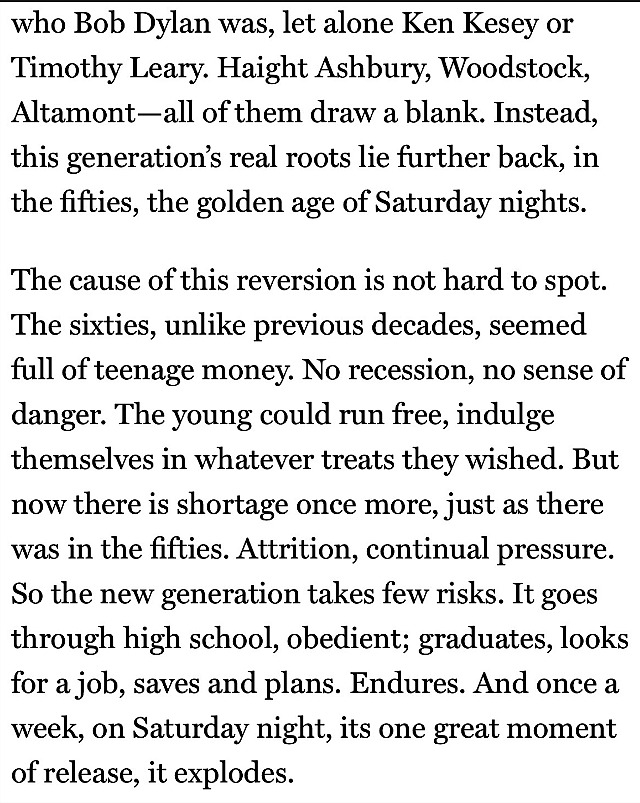 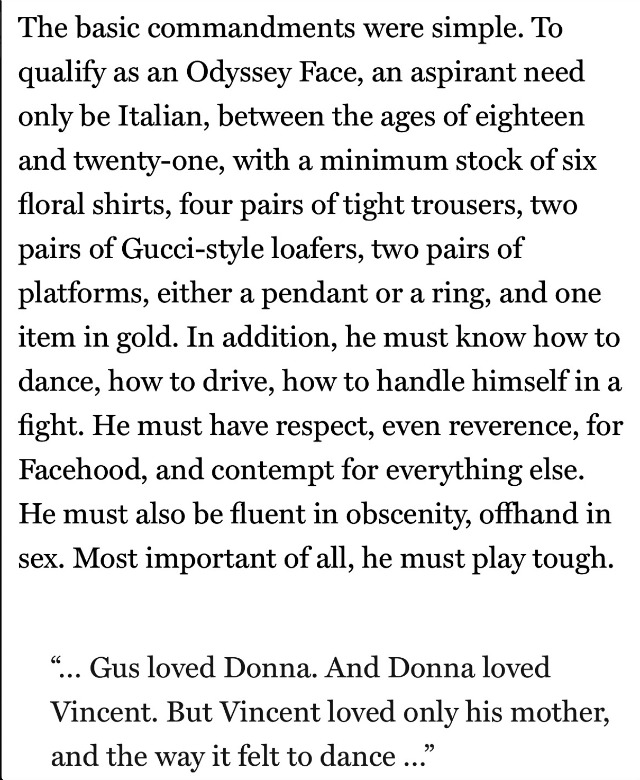 Wiki excerpt: “‘Tribal Rites of the New Saturday Night‘ is the title of a 1976 New York article by British rock journalist Nik Cohn, which formed the basis for the plot and inspired the characters in the movie Saturday Night Fever (1977).

“Originally, the article was published as a piece of factual reporting. However, around the time of the 20th anniversary of the film in 1996, Cohn revealed that it was actually a work of fiction.

“After persuading New York editor Clay Felker to let him write an article about the 1970s disco scene, Cohn, a newcomer to the United States, set about researching the American working-class subculture he was trying to cover.

“One night he travelled to Bay Ridge, Brooklyn, to visit the disco 2001 Odyssey. However when he arrived a drunken fight was taking place outside the club, and one of the participants rolled over in the gutter and threw up on Cohn’s trouser leg, leading him to return to Manhattan. Despite this brief visit, Cohn did notice that the scene was surveyed by one clubgoer standing in the doorway and calmly watching events. Cohn returned to the club subsequently but the young man wasn’t there.[3]

To overcome his lack of familiarity with the New York disco scene, Cohn combined the image of the figure outside the club with people he knew from his youth, including a gang member from the Northern Irish city of Derry, where Cohn had grown up, and a young man he knew in England.

“’My story was a fraud,’ he wrote. ‘I’d only recently arrived in New York. Far from being steeped in Brooklyn street life, I hardly knew the place. As for Vincent, my story’s hero, he was largely inspired by a Shepherd’s Bush mod whom I’d known in the Sixties, a one-time king of Goldhawk Road.” or additional detail Cohn returned to Bay Ridge during the day to get a better feel for the area.

“On the 40th anniversary of the article’s publication in 2016, Cohn said that he thought that such a fictionalized piece would not be published in the contemporary press.

“It reads to me as obvious fiction, albeit based on observation and some knowledge of disco culture. No way could it sneak past customs now. In the 60s and 70s, the line between fact and fiction was blurry… Few editors asked tough questions. For the most part it was a case of ‘don’t ask, don’t tell.’”

December 14, 2020by Jeffrey Wells35 Comments
« Previous post
For The Sin of Disloyalty
Next post »
106 Republican Thugs United Against Democracy