“A theory on documentaries that strip-mine the 1960s: The less fresh insight the program has to offer, the earlier the Buffalo Springfield song ‘For What It’s Worth’ will turn up on the soundtrack,” N.Y. Times TV reviewer Neil Genzlinger remarked yesterday. 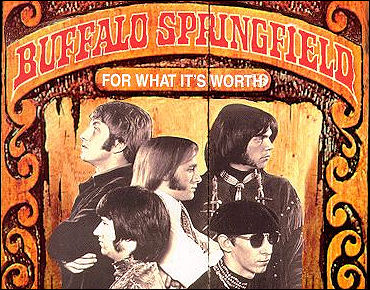 “Written by Stephen Stills, that astonishing song (‘There’s something happening here/What it is ain’t exactly clear’) came to encapsulate ’60s turmoil so perfectly that resorting to it is a subconscious admission by a documentarian: ‘I have nothing to say that Stephen Stills didn’t say better in 2 minutes 41 seconds.”